A fast-talking American 'minister in song' had to go the long way for recording success. He went to Sao Paolo and back... Ian Boughton talked to SAM BAKER. 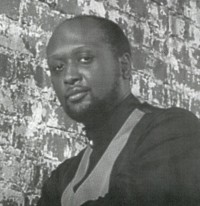 "Awriiiight, man! Tell the people about it - tell them they can be free Ito serve God and he'll keep his end of the bargain, man!"

Sam Baker is that uniquely American creation, a singer-minister with a larger-than-life enthusiasm for his work, words tumbling out faster than anyone can chase them; only an American from the Chicago area can mix God and jive-talk and get it to make sense. This year alone, Sam has been in Britain three times and his autumn trip comes as the Americans show fresh interest in his 'No Love Lost' album, which was a year old when it was suddenly taken up for re-release and a new promotional campaign there.

So now, life is busy for Sam Baker Ministries of Gary, Indiana - and although he's lived there all his life, the road to gospel recording took him through, of all places, Brazil. "Man, I guess that's the way God had it planned. Gospel Records, out of Sao Paolo, found me up here, they liked what I was doing and they took me down there twice...we did two projects there and we gave the proceeds from the second one to feed the poor people an' all.

"And that was something big as Woodstock, man. I mean, thousands and thousands and thousands of people. I never seen so many people in my life! These people really love their gospel music and they really come out for it: this was a big soccer stadium, 120,000 people and turning more away... Awesome. People were all the way down to the front of the stage, like 10 feet away. Oh man, they were right at us, and the audience was just pulling the music out of us. People were heading there just to praise and worship, young people were weeping...it was awesome, bro'! During the sound check, there was a group marching around the stadium, praying for the concert that night - no jive, man, this was serious prayin'! Wow, God was really moving down there."

Black gospel singers traditionally start in church. Sam Baker laughingly says that he couldn't have avoided being a gospel singer if he had wanted to. "Yeah, I was raised in the church and all I know comes from the church, because my dad, who we lost about a year ago, was both my dad and my pastor, and he taught me to play guitar as well. So I was brought up in church - hey, if I hadn't a-gone, my dad would have taken a switch to me!"

As a result, when the first offers of contracts for mainstream music came in, even the 16 year old Sam was committed enough to turn them down. Incidentally, it's worth noting here that this Sam Baker is not the Sam Baker who was recording R&B records for Sound Stage 7 back in the '60s. As I said, our Sam hails from Gary, Indiana.

"Well, Gary was a real decent poppin' city back then and there was a lot of talent around - the Jacksons were really hot and the elder ones were about my age. So, when I was in high school, we had a lot of talent scouts around and I happened to be one they wanted for mainstream secular music, but it was my conviction that I want to sing for God. For me, there was no question about it, but those scouts couldn't understand why I said 'no' to them - they were willing to supply everything, even a tutor so I wouldn't miss any schooling.

I guess that was quite a conviction to have at 16 and those people kept pulling at me, but the guy I was singing for was the one I wanted to serve. And he's been faithful to me... yeah, he has, man! God is true to his word!"

And that turns out to be the entire theme of 'No Love Lost', a surprising mixture of an album - it uses a lot of modern production, in that every drum beat is almost certainly machine-made and yet there is a noticeable throwback to black American church music in the vocal styles and the straightforward message of the unconditional love of God.

"That's it - that's why I say that if people serve God, he'll hold up his end of the bargain. And if it sounds like church singing, that's because I wanted people to hear it and say, 'This guy didn't just pick up a mike and start singing about God, this guy's really comin' from a church.'"

Sam's also from the streets, which comes through in the casual rap that spices the backing vocals. "Hey," says the backup singer conversationaly at one point, "if I hadn't met Jesus when I did, I'd have been outa here: I'm free, and it feels good, too!" (In Sam Baker's self-written reggae-styled 'Day Of Pentecost' comes the gleefully-casual rap, "Yeah, dey was all filled wid the Holy Ghost, man!")

The production is from Terry Garman, of the wonderfully named Peculiar People Ministries, and Tommy Sims, who wrote the title track and has played bass for Bruce Springsteen, White Heart and seemingly a zillion others. "Yeah, he's real big, he produced Amy Grant and all the others - but we went to church together before he made it."

There is also a mysterious sleeve credit to Tom Bynum of the New Wine Christian Centre in Chicago, with the remark, "You didn't have to do it." Do what? "Oh, he's one of the big pastors here, with a national TV programme. I made some videos and he didn't have to play them, but he put them on all the time and it helped my ministry a lot... he's a good brother, with God moving in his life."

That reference to ministry on national television, says Sam Baker, explains a lot of why contemporary Christian music seems to have so much more acceptance in the States. "It's all about presentation and we have a lot of that over here. That's why people in the States have no excuse not to be acquainted with God, 'cos he's everywhere... I mean, we got four or five gospel radio stations in this area along! There's no excuse - every way you turn, there's God!"

The problem, of course, is that once something hits any kind of wide-reaching media, everybody wants to get in on it, and the businessmen start taking an interest. As the album's British distributor, Rob Hillman of Spirit Music, has observed, "Sam's a standout, but black gospel artists like him have more of a problem getting noticed in America because it's such a ferociously competitive field." Can Christianity and competitive business go together? "Wow, 'ferociously competitive'... yeah, that's good! Now, what a lot of people don't understand is that mainstream Christian record companies are owned by secular people and their main interest is money. I promised myself I would never get caught up in a business mindset like that, 'cos once you start thinking, 'Hey, I gotta make this gig, or that's two thousand bucks outa the window,' then that's the end of your ministry.

But you don't have to sweat about that, because God's got it all under control. I can keep my handkerchief in my pocket, man, 'cos it's no sweat - my main focus has always been to give glory to God and I can let that rat-race carry on running right round me, no problem!"

Some of the production on 'No Love Lost' was done in Nashville. "Yeah, Nashville is the music centre of the world and a main artery for gospel... if you're recording there, you get guys handing you tapes of their songs while they're washing your car windows!"

With all the production work that went behind 'No Love Lost', what does Sam Baker sound like on stage? He tries a straight-faced protest which collapses immediately. "What you mean? When I'm out singing, I sound just like on the CD, no problem... 'cos I got the tapes, I got 'em sequenced, I hook 'em into the sound system and boom, there it is, right in yo' face, man!"

So what is Sam Baker Ministries? Is the man a pastor or a singer? "I'm a minister in song. We teach at the same time, so it's ministry through song. But we also go out on the street, to the abandoned buildings in winter where there are people with no place to go, and we feed them - it's all about helping people.

'That's why the next album will be uptempo, because we gotta reach the kids and keep them interested, and hang on to them. We gotta do that because they're just out there with nobody they can hold on to; so I want to keep the content where I can reach them with the music and talk about Jesus at the same time. That's the secret, man... They got zapped, and they don't even know it. Jesus knows it, 'cos he's got that one whopped too, - he ain't hangin' on that cross no more, man, he's down here working with us!"

Loved listing to you years ago at outside concert whme even after all I've done. Do I have the right person ?

You are a heavy weight in the Body, thank you for you Gift. Hit me up, I have something you might want to get involved in.

Hi Sam, This is Elder Richard T.Baker &wife Helene
We,haven't seen You, in years.
We,are singing ourselfs now,and wanted You to take a listen ok.
We, need Your help ok.

We,are known as Endowed
The name of our Album is,Lovely Relatable Songs ThatHeal by Endowed (put in Helene Evans and Richard Baker
Sam,You may call at 1+574-401-0132 .
Please take a listen.
And if I don't hear from You, I'll sad.
The Bakers

Sam Baker, I hope you have a 20 years memory to remember of me...
Please send me an email, pleased to find you, dear brother and friend.
Blessings,
Etiene

man i love what u are doing,that music is off the hook .truely anointed.keep on flowing with jesus @being you i"m still enjoying no love lost@ waiting on that new CD God speed