Duncan and John McColl of SOLOMON'S FOLLY give the facts to Tony Cummings. 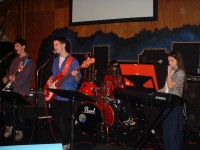 Tony: Let's have a history of Solomon's Folly.

Duncan: Solomon's Folly started off as a praise band - which was a bit revolutionary for the Church of Scotland, but there was great encouragement from the minister and older band members at that time. However when he retired there were people who opposed the band and opportunities to play in church decreased. Then we started Solomon's Folly as we had been listening to GOD digital and Cross Rhythms and had a vision to bring young people into the Church. We played at Christian youth cafe's in our area where other young Christians encouraged us and where we saw other Christian bands. We spent ages thinking and praying about a name, then at a youth cafe when we were negotiating our first gig, one of the leaders asked us what we were called and in a moment the name came to our manager, just at that instant, and he said, "Our name? Oh, er, ... Solomon's Folly!" We believe that came from God just at that moment. But it also fits in with our beliefs from Scripture about marriage, men and women in the Church, feminism, gender - neutral Bible translations and all that stuff. The band members are John (guitars), Matthew (bass), Duncan (drums) and Jennifer (keyboard). We all play piano and Jennifer plays saxophone, clarinet and whistle when we do praise and worship. It is quite easy to get together for a practice because we are all in the same family. John is the eldest - he is 18, then Matthew, then me, then Jennifer who is 13. We have played gigs at our school which we enjoy a lot as well as youth events and other stuff.

Tony: Who has been your biggest musical influence?

Matthew: Our biggest musical influences would probably be Delirious?, Benjamin Gate, Foo Fighters, Muse, dc Talk, Rebecca St James, Deep Purple, Bon Jovi, P.O.D. and Hillsongs. When Solomon's Folly started our first songs were covers from bands such as Jars Of Clay, Plumb and Eminent Child. Bands such as The Benjamin Gate, Deep Purple and Muse influence our band towards heavier, rockier music and Delirious?, Rebecca St James and Hillsongs influence us more on the mellower and worship side.

Tony: This is your first single. When can we expect a Solomon's Folly album?

Jennifer: We almost have enough songs for an album, so it could be later this year. We have eight tracks written so far but school exams have held us up a bit.

Tony: Of the songs you haven't recorded, which would you say is your best one and what is it about?

Matthew: "End Of Time"! It was written around Christmas 2002 and we decided it was to be kept for the album as we had already chosen the songs for the single. "End Of Time" speaks about the tragedy of the world ending when Jesus comes back and the signs we will see. However, clearly saying we should never abandon our trust in Jesus but instead "abandon idols of wood and stone, and trust in him..... alone!". It is one of my favourite songs as it has a thumping, hard-hitting rhythm on bass and drums and an apocalyptic feel. It's scary!

Tony: What is your spiritual vision?

John: Our spiritual vision as a band would have to be a focus on the young people of today. Sadly there is a lost generation out there, a generation of young people who enjoy indulging in alcohol, drugs, wild parties and sex outside of marriage. Our vision is to reach them with the good news of Jesus, but the tricky part, however, is presenting the Gospel message in a new and exciting way, a way in which they will understand - dealing with issues which affect them daily. Solomon's Folly try to do this through our songs and multimedia presentations. We feel we need to break down stereotypes of Christianity and let young people realise first hand what God has done in our lives and what he can do in theirs. Jesus is about "relationship" - not "religion"! Our new single "Church Of The Age" informs young people that "Hey! - OK, so the Church isn't perfect," half of it may be asleep to the urgency of it's work, but are you guys not also asleep and putting your souls in danger? It also challenges the Church to examine it's own attitudes. But having performed our set, done our work, spoken to new friends and perhaps persuaded them that Jesus is an option, is there a place in their local church where young people can come in and make it their own place of worship, a place where they can meet friends and meet with their Creator Father on a personal level, not hindered by old traditions and things which are secondary in an eternal perspective? Or are we their only Church? We pray for more churches willing to be contemporary for young people and for young people to be less individualistic and that they may meet each other half way. Amen?