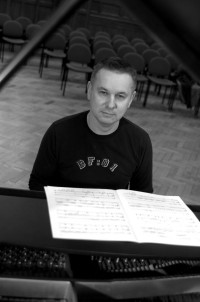 Tony: Can you give us a biography prior to you producing your first album?

Chris: Born in New Zealand in 1953. I began composing at the age of 14 and by the age of 16, had an orchestral work performed and broadcast. Completed an honours degree in music from Otago University in 1974 and had some success as a pianist in New Zealand, playing with the Symphony orchestra and broadcasting on the Concert Programme. I was at the same time teaching music in local high schools and beginning to freelance as a composer and arranger. I had also started to play keyboards in a rock band and became interested in jazz and pop. Came to the UK in 1977 on a New Zealand government scholarship and studied composition at York University with Wilfrid Mellers and David Blake. I wrote a variety of pieces during this time - choral works, orchestral pieces, piano music and musicals. Played in various bands and started to experiment with combinations of styles that crossed the divide between my classical background and the more contemporary popular styles that I was playing. My earliest publications were with Universal Edition in London and included Carol Jazz - improvisations on Christmas tunes and Sing'n'swing, for choir, piano and percussion. In 1983, I was signed by Boosey & Hawkes and the first of the Microjazz series appeared - music which appealed greatly to children and teenagers but was rooted in the classical tradition sufficiently to be useful as teaching material. The series has expanded over 20 years to include music for all of the major instruments with piano, ensemble books and midi file backings. It is now the biggest selling music series for Boosey & Hawkes, with probably a million sales to date. Over the last 20 years, I have also written much other music for the educational market. During the same time period, I have written much music for television - most recently for Junkyard Wars - have written many pieces for library music companies and have also found time to produce huge numbers of albums for particularly the gospel market, with releases worldwide selling in excess of 1,000,000 units. I am also an active publisher, particularly of religious music.

Tony: Your name as producer seems to come up on dozens and dozens of albums. How did you get into record production?

Chris: I was a keyboard player and arranger for Phil Potter's 'Lead Me On' album (1979), which was produced by John Pantry, and John and I had a long and happy association for a number of years. This got me familiar with studios and production. I produced a few albums for Word UK in the early 1990s, including the first 'Praise Him' albums and their success, both in Europe and America (re-released as the 'Ambience' series) meant that I kept being asked to produce projects - for Word initially, then for various other labels. This situation has continued until the present day.

Tony: You seem to live in recording studios! Is that true?

Chris: I have associations with a number of studios around the UK (including Northern Ireland) as well as set-ups in the USA and Australia. I co-ordinate the efforts of lots of individual musicians and studios to create a global recording set-up that is really internet-based. I also do lots of live recordings - the Hymn Makers series for example (20 albums!) which are always the most fun to do. The day of big studios is over and I have created new ways of recording that avoid being locked away in studios for weeks at a time.

Tony: Of all the numerous projects you've worked on, what would you say are your three or four favourites?

Chris: The Celtic Series (Eden's Bridge) - together with my US business partner, we got this series started and its worldwide success is very satisfying; The Hymn Makers series and Heart Of Worship - it's very interesting trying to create albums that reflect the best of what's going on in praise and worship around the world and it's a challenge to get the albums sounding authentic - all singers are actual worship leaders. Sales of these three series are probably around 1.1 million units, which is also satisfying - there is a market out there for Christian music!

Tony: The 500 Series is proving to be a popular one. How many of the songs were unfamiliar to you?

Chris: I know most of the songs on the series - we (CN Productions) are also responsible for the World Of Worship series and The Source recordings, so we really are pretty familiar with the worship song repertoire!

Tony: You've worked a lot with the singer Simon Goodall. What particularly attracts you to Simon's vocals?

Chris: Simon is a great singer who is versatile and a fast worker! He sings with real feeling and can invest the simplest song with a real intensity.

Tony: Many of the singers on the 500 Series (Calvin Bottoms, Ingrid DuMosch, Shannon Sparks, etc) are, I believe, American. What percentage of the vocals were recorded there, then?

Chris: My American singers sing on songs that seem particularly suited to US voices. I like mixing up singers from different countries on recordings to create variety and to get the authentic styles that are often required. We've just done a Spring Harvest hymns album and Lesley, the girl singer on the album, is in Paul Oakley's band. You can't get that distinctive UK sound from an American singer. But when it comes to a song like "Restore Me", the final track on 'Heart Of Worship 3', an American singer is absolutely ideal. I try to slightly favour the UK singers, so I'd say US singers do round 30-30 per cent of my vocals.

Tony: When you assemble the list of 500 Series songs to record, do you try and say, "Let's put in a couple from the Catholic tradition, a couple of Graham Kendrick's," stuff like that? Or are they simply the first ones for which you have the words and music to hand?

Chris: I didn't have any say in the selection - it is literally CCLI's top 500 songs!

Tony: Has there been any song in the 500 Series copyright list where you've had real trouble tracking down words and music?

Chris: Not really - I have all the songbooks and also record all around the UK, so I can generally track things down.

Tony: What would you say is the appeal of the series?

Chris: Funnily enough, it's the middle of the road aspect that people like - we are trying to have something of the classic Maranatha praise albums of the '70s as our starting point. What I have discovered is that the 35 age group really like them and so do children, who like the songs, but aren't looking for hard rock versions.