In our series documenting the roots of Christian music we take a look at THE CARTER FAMILY, the singing trio from the Clinch Mountains, Virginia who changed the face of popular music. 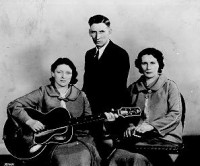 If you'd predicted that the gauche trio, the man in overalls, the women in cheap floral dresses, who stepped shyly into Ralph Peer's makeshift recording studio in an empty furniture store in Bristol, Virginia on 1st August 1927, were to change the course of popular music history, few would have believed you. Yet Alvin Pleasant 'AP' Carter (aged 35), his wife Sara (29) and 18 year old Maybelle Carter, who was both Sara's cousin and AP's sister-in-law, were to do just that. Ralph Peer, the Victor Talking Machine Company talent scout, buoyed up by the realisation that there was a growing public for hillbilly singers and old time music, was there to record rural talent and that's just what The Carter Family were.

Accompanying themselves on guitar and autoharp they sang timeless music. Sara's clear, strong voice with AP and Maybelle providing harmonies gave vibrant life to the old Victorian parlour ballads and gospel songs the Carters recorded that day. When the 78s of The Carter Family's first six recordings were released they sold well enough for Peer to invite the trio to record 12 more sides, this time at Victor's Camden, New Jersey studio. The family travelled by train to New York for the session in May, 1928. The recordings they made included "Keep On The Sunny Side" and "Wildwood Flower" -hugely influential hits which helped the development of country and American folk music in the coming decades.

Ralph Peer was now The Carter Family's manager and he encouraged the group to record traditional songs that were in the public domain so that their copyright claims could be registered. AP Carter rose with a will to this ethically questionable task, putting his name to the songs with Peer publishing them despite some numbers, like "Keep On The Sunny Side" which became the Carters' theme song, already being copyrighted by the gospel composers who actually wrote the song while others like "John Hardy Was A Desperate Little Man" being genuine folk songs.

The major record sales The Carter Family enjoyed didn't protect them from the Great Depression that followed the stock market crash of 1929. Like other families, the Carters were drawn away from their home by the Depression. AP went up north to work in Detroit for a few months in 1929; Maybelle moved to Washington DC with her railroad worker husband, AP's brother Eck, in 1931. The group still came together to record, making dozens of sides a year.

Now more than ever, their sacred tunes and songs of the old home place struck a responsive chord in American hearts burdened by hard times. In an atmosphere of fear and uncertainty, the Carters' voices always sounded wise and strong, even when they were singing about death, loss and heartbreak. "Worried Man Blues", released in the fall of 1930, sold widely in a country that had good reason to "sing a worried song." By 1931 The Carter Family and Jimmie Rodgers were the nation's top recording stars. Since both were Victor artists, Peer hatched the idea for the first all-star team-up in country music, bringing the two acts together to record in June of 1931. The combination of "skits" and songs in 'Jimmie Rodgers Visits The Carter Family' was a monster hit by Depression standards, selling 24,000 copies.

In early 1933, Sara abandoned her faltering marriage to AP and moved out. She also sought to leave the recording group - it had never been her ambition to be a singing star - but Peer and his wife Anita persuaded her to return to the studio that summer. From this point forward, the Carters were a family only on record. AP continued to ransack the countryside for songs, from African American gospel numbers like "Up In My Father's House" to the poignant mid-19th century song "Are You Tired Of Me, My Darling". The family also recorded cowboy songs from various sources.

The Carters' December, 1934 session would be their last for RCA Victor in the 1930s, though they returned for one final session in 1941. Peer, their long-time manager, had left the company and soon brought his star act with him. In 1935 the group signed with the American Record Company, recording 40 sides for that label before moving on to Decca in 1936. They remained with Decca until 1938, when they began a phenomenally successful run of live performances over Mexican "border radio" stations. The following year AP and Sara finally divorced; Sara married AP's cousin Coy Bayes and moved to California in 1943.

The family's reign over American popular music ended in the 1940s, but their music has remained fresh and vital over the decades. The Carters also engendered a dynasty of country singers: Maybelle's daughters Anita and June both became recording artists; June married Johnny Cash after ending her marriage to Carl Smith; June and Smith's daughter is Carlene Carter, who was married for a time to British pop rocker and songwriter Nick Lowe.

Periodically, the songs of the original Carter Family are "rediscovered" by popular culture. In 1972, Maybelle - now known as "Mother Maybelle" - recorded with the Nitty Gritty Dirt Band on their influential double LP 'Will The Circle Be Unbroken'. The family's music and legend are central to the Joel and Ethan Coen film O Brother Where Art Thou, which kindled a bluegrass and old time music revival in the year 2001. As Louisa Hufstader wrote in her sleeve note to 'The Carter Family 1927-1934' box set on JSP, "The recordings of The Carter Family are truly an enduring treasure. As the 21st century unfolds, we can still count on the songs that cheered and comforted Americans during the darkest years of the Depression to brighten an often shadowy world."