The Tribe: The all change crew still on the cusp of teenage evangalism

THE TRIBE spoke to Mike Francis and Robbie Frawley. 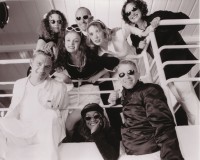 What is The Tribe's message?

Tim: The message is the same as it has been - the message is Jesus. The reason The Tribe was put together was to make sure that every young person in Manchester receives repeated opportunities to accept or reject Jesus. That's our mission statement.

But everybody looks upon The Tribe as a band, it's out there, on stage, selling CDs, that's the gig.

Tim: We are schools youth workers. If I was to put down a job description on an application form I wouldn't put dancer or rapper, I'd put schools worker or evangelist because our mission is to go into schools and give the kids repeated opportunities to accept or reject Jesus. So the first fundamental thing is to get on with kids. We're employed as schools youth workers, not as rock stars, so to speak, although that is chucked in as package, it's not the main fundamental of what it is to be in The Tribe.

George: Music is a tool we use so we can speak to kids because they relate to music. Obviously we want to be good at it, we all love music and what better way of doing it than working hand in hand with the gifts God has given us to make that difference and to reach out to kids.

How do you balance being on tour, doing albums and staying true to the original call to be involved with the youth in Manchester's schools?

Tim: We take everything that comes in through the office in terms of a booking for a gig or working with someone and it gets put through that mission statement. Does it fit in?, How does it fit in with our mission statement with seeing every young person in Manchester given repeated opportunities to receive or reject Christ? Or does it fit in with raising the profile of what is going on in Manchester which might generate finance for the ministry or might generate awareness for new youth workers to go into the Eden Project which is something else we're involved in. Or is it going to drum up prayer support for us? School always takes priority, but if we're not in school then we can start looking to see if it fits this other criteria.

Emma: The schools work gets booked in first. I've booked in already the schools up until September 2002. Then if we're not in school and we're available we then check out all aspects - are we the right people for them? Are they the right venue for us?

What sort of impact do you think you've had on the schools over the years?

Quintin: I've only been here six months but in the time I've been here it's been amazing. Because we've had a new album and George and I have had to catch up and we've had loads happen, we've only done two full schools weeks. In those two weeks alone I learnt so much as far as what The Message does but fundamentally out of those two schools we had 60 kids, even more than that, make commitments - that was from one school.

Emma: We had three or four coaches put on by the Eden Project to ship kids from the school to one of our monthly Planet Life events and we've never seen that before. That was just awesome.