Touched By A Song: "Your Way To Me" by Adrian Snell 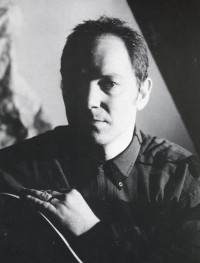 I must confess that the testimonies of others frequently make me feel inadequate. Of course, a dramatic conversion is a wonderful demonstration of God's power, and often the most powerful witnesses for Christ are "I used to be a bank robber but then God saved me" figures. But, on hearing such stories, I often fall into the trap of thinking that I too must stun audiences with my story.

I take my hat off to the friend who, when asked to give his testimony at a University outreach, stood up and said: "I became a Christian when h was a very small child and it wasn't particularly exciting. Today I want to tell you why I'm still a Christian and what my relationship with God means to me now."

I became a Christian when I was eight years old, in the music room of my local primary school. It was a small, quiet miracle which changed the course of my life. But it will never make a show-stopping yarn.

The song I have chosen has made an on-going impact on my life as a Christian rather than in a single dramatic incident. Its theme is one I have had to be reminded of, again and again.

I am not a great buyer of Christian music. Hour-by-hour Kendrick in the Christian bookshop where I used to work more or less killed any love I ever had of praise and worship albums. And I often find that contemporary Christian artists put across a "smooth clear highway" view of the life which does not allow for the potholes I frequently encounter.

But when, during a quiet moment in the shop, I sneaked a glance at the lyrics of Adrian Snell's album 'Father' I was impressed. So impressed that I bought it. As I listened to it, it spoke to me where I was at.

Choosing a single track is difficult, as readings, instrumentals and songs fit together to shape its overall concept. As a whole it ministered to me, particularly when, soon afterwards, I went to University, to live in a halls of residence bed-sit of shoebox proportions. Playing the album quietly, late at night, I felt the Lord very close to me: not a distant godhead, but my father. I only wished my neighbour, a metal fan, would play his music equally quietly!

In the years which followed, I changed, and my relationship with God changed too. The intimacy I had known with God in that little room gradually slipped away. I barely noticed until one day it wasn't there. Then I knew I wanted it back.

But my "father" had been replaced by a picture of a more distant God. One who ladled out joy and sorrow to me and those around me in a seemingly arbitrary way. On a long country walk last summer I asked God to show himself to me, although I didn't understand him, so I could know him personally again.

Here "Your Way To Me" is particularly appropriate, because it admits that frequently we build walls for God, informing him that certain areas of our lives are out of bounds. Even after my prayer I preferred to shut him out, clinging to the more immediate events and relationships in my life.

Recently, when a difficult situation threw my life into crisis, I happened to attend a talk by Adrian Plass, which again reminded me of this song. With a characteristic mix of humour and sensitivity he described the father in the parable of the prodigal son. The man of status hitching up his skirts and running full-tilt to take in his arms a son who smells of pig slurry is, he pointed out, an image of God.

Suddenly, God no longer seemed harsh, distant and arbitrary. He was vulnerable, as the song says, with "hopes and fears" wanting me back. It was with an odd mixture of joy and pain that I knelt on the floor of my (now much more comfortable) bedroom and admitted to my "father" that the situation I was in scared me half to death.

As a natural sceptic, I didn't find it easy to accept from God the most secure and lasting relationship any human being can hope to have. But I know that only my "proud heart" kept God out for so long. When I needed him most, in his grace he revealed himself to me.

Adrian Snell dedicates his album to his own father, suggesting that in him he saw the image of God. Like him, I am lucky: I have a good father, loving, just and firm. But I know that others who do not know this privilege have been able to discover in the Lord a perfect father, as I did, who is longing to be introduced to the imperfect child in us."

YOUR WAY TO ME
Words and music by Adrian Snell

Why do I close the door on you
Exclude, refuse this part of me
What is the fear I hold on to
The wall I build and place between
Your searching eyes - and mine rehearsed
Evasive, distant, hard

Why must I choose the perfect time
The moment you may enter in -
There's no negotiation there
No sense of what it is to share
Just "you may come so far... no more'
The rest left to another hour

And in the midst of all of this
You stand with all your hopes and fears
With open arms
And longing for my tenderness
Then how I long to call you here
Caress and hold you very near
To comfort you, and lead you to the child inside

O never lose this part of you - no surrender
Believe and love and fight your way to me
For only you can come this far
And how I need you to...
Stone by stone dismantle this proud heart of mine
And stay with me, so we may journey on as one.