Recently the National Gospel Awards winner for the best UK rap artist, WATCHMAN is breaking through from the underground reports Tony Cummings and Lee Jackson. 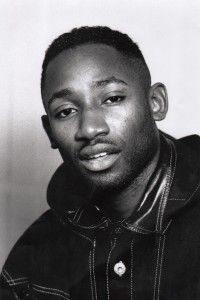 Say Christian rap to your average Christian and if they don't stare at you in incomprehension or run from you scattering fundamentalist tracts, he'll assume you either mean the pre-'Jesus Freak' pop rap concoctions of DC Talk or the Christian alternative gangsta rap ala Gospel Gangstas. But of course in the UK it's been the Jamaican-style rappers who've long given much of Britain's secular rap scene a distinctly JA flavour and now Britain's Christian music underground is raising up some hot ragga and jungle gospel artists. In coming months Cross Rhythms will be looking at this streets revolution (don't look for them in your local Christian bookshop - UK CCM companies aren't yet that streetwise) but we thought we'd kick off by checking out London-based David Williams, known to an ever increasing circle of devotees as Watchman.

Watchman grew up hard, took up boxing but soon became an ever more proficient street fighter. Leading a street gang the teenager was a dangerous man to be around. "I used to be so angry all I wanted to do was beat people up," he remembers. At the age of 16 he had a confrontation with the police and went to prison for something he did not do. Subsequently in and out of prison he seemed destined to a life of frustration and pointlessness. Then on 27th September 1992 everything changed.

This day was described by his sister: "David had been behaving strangely, and even more strangely when he decided to go to church, considering his street image. David sat in the service listening intently at what was being said, then finally the altar call was offered to all, David sat choosing not to go forward at first. Suddenly something began to happen to David's being. He began to wail like a baby, fighting what had come upon him (namely the Holy Spirit). He began to resist the power of God, that had come upon him so strong. He uttered words such as 'I can't serve you, I will only sin again.' With these words he found himself on the ground, not knowing how he got there. In his determination not to yield he stood up, but no sooner he found himself back down on the floor again."

This time David found himself surrendering all to Jesus and confessing all his sins.

Soon after his dramatic conversion Watchman - gospel rapper emerged. He quickly made an impact, his lyrical JA style a riveting sound effective with a simple snare loop, a black gospel choir or even jazzed-up versions of praise and worship choruses. It was his engaging contributions to the 'Now That's Worship' dance-orientated compilation on Kingsway which was Watchman's first release on record though it's been his raps on the 12 inch single by Maxine Braham "Seasons" which has caught the ear of mainstream and gospel deejays alike.

Lee Jackson caught up with Watchman recently and here's a record of their chat.

What do you hope to achieve with your single "Seasons"?
"I really hope the Lord takes it to the four corners of the earth. That it would go more and more into the nightclubs and into the world."

What would you say is the purpose of your music?
"Well... the day when I'm not doing music to win souls I'll give it up. The only aim for me is to see souls coming into the Kingdom. I have a ministry to the body of Christ but mainly to the lost."

Would you say you are a jungle evangelist?
"I used to be an evangelist for my church until recently but God has called us all to evangelise and make disciples of all men..."

Why is your music called gospelist?
(He laughs...) "Well, I used the phrase in one of my tracks and it has stuck!"

How do you keep your head above water in a music which is known for overt sexual lyrics?
'The gospel is the word and not the music, my music is just a vehicle used to channel my words. The music that I use will attract these people but what they'll hear is the word, the Gospel. My lyrics are life."

Are you full time in the music business?
"Yeah... I'm full time because I have yet to find out how you can be part time in the Gospel." (I realised then what a stupid question that was! I was feeding him lines!)

How do the non-Christian DJs react to your music? The lyrics are obviously Christian.
"So far they've been excited about it and deep down I think they are all searching."

As a Christian DJ I must say it's good to get a Christian track on vinyl. Please keep it up - CDs are not much use.
"Yeah... we need vinyl, that's what the dance guys are doing. They still use vinyl."

I have noticed a change in the Christian music scene recently - have you noticed a change for the better?
"Most definitely, God is really doing things. God is saying, 'what about the lost?' I have been made more passionate for the lost and I thank God for that... He has brought me from the prisons, from a life of violence, I have come a long way and I need to go on. I need to preach the gospel. We got to be radical for Jesus, not apologise for him!"

Don't let anyone take that away from you.
"Yeah... I could go on all day!"

Watchman then prayed for me, encouraged and blessed me over the phone! He certainly knows where he has been and where he is going. Look out for him this year.

can you sing for charity but also promote your latest material.
we are giving you that opportunity at our show
please get in touch asap

Hi there, I don't know if you remember me? I worked with Pastor Ed and Lori Hornabck for many years. We had you many times when we did our "Crossfire Youth Conferences" Are you still in London? Blessings, Husna :-)