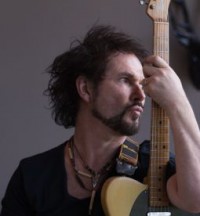 LONG ESTABLISHED Belfast-based singer/songwriter Brian Houston is releasing his new album under the name King Boru. Talking about the Irish music orientated project 'Anam Cara', which features guest appearances from Robin Mark and Joanne Hogg, Houston said, "I wrote and recorded this album commencing in 2018 around October. I had steeped myself in Irish traditional music for two or three years before that. I wanted to immerse myself in the music of my island so that the tunes would eventually seep out of me naturally."