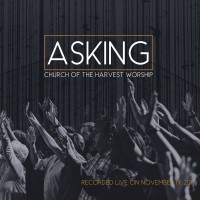 THE MULTIPLE-location church, Church Of The Harvest, originating in Oklahoma City, have released a worship album. 'Asking' by Church Of The Harvest Worship features singer Charity Von about whom America's Christian Retailing magazine once wrote, "While bluesy teen singer Joss Stone wails aloud in the general market, her heavenly-focused vocal counterpart arrives in the form of 19-year-old Charity Von."