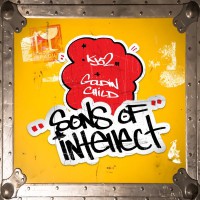 POPULAR rapper KJ-52 has re-released a 20-year-old recording, "Insightful Comprehentions", he made with the short-lived group Sons Of Intellect. It was originally released in June 1998 and featured KJ-52 and fellow rapper Golden Child. Wrote KJ-52, "Boom bap production with Christ-centred lyrics, coupled with the wisdom of grown men, the time is perfect for a project like this! I pray you're impacted by this as much as we were 20 years ago."