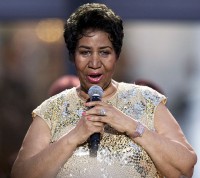 REMIXERS Nick Patrick and Don Reedman, having enjoyed a hit album by mixing Elvis Presley vocals into new string arrangements by the Royal Philharmonic Orchestra, are doing the same thing with 10 tracks by soul music great Aretha Franklin. The 'A Brand New Me' features reimagined versions of "Respect", "Think", "Angel" and others.