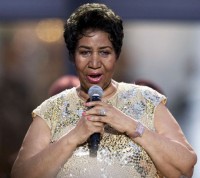 PREVIOUSLY unreleased on DVD or CD is the package 'Divas Live: The One And Only Aretha Franklin' recorded live at New York's Radio City Music Hall and broadcast on US TV in 2001. The project features versions of some of the singer's hits like "Respect" and "Think" as well as material as diverse as Otis Redding's "I Can't Turn You Loose" and Giacomo Puccini's "Nessum Dorma" as well as special guests including Stevie Wonder, Mary J Blige, Jill Scott, Backstreet Boys and Kid Rock. The longest track on the project is a nine minute 21 second version of "Precious Memories" by Aretha with Bishop Paul S Morton & The New Jersey Mass Choir.