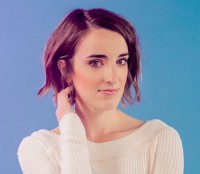 THE MINI-ALBUM 'Human' by CCM singer Holly Starr has now been transformed into a full length album with the release of a Deluxe Edition of the project. The new version contains a Matthew Parker remix of the title track; a new song "Talk It Out" - an encouragement for healthy communication during conflict in relationships; and "I Don't Know" - a song that celebrates God is sovereign and infinite wisdom in all things. Said Holly, "The additional songs add a fun element to the project and I can't wait to share some of them live on tour."