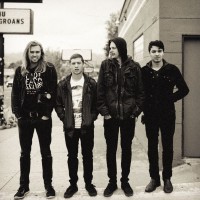 SOLID STATE Records have released the EP 'Renovate' by South Dakota quartet Earth Groans. The project is described as "five songs of chaotic and dissonant metallic hardcore but deeply introspective". Said the band's vocalist Jeremy Schaeffer, "We want to be a ministry first and a band second."