Alabama's Carla Williams teams up with 4Him singer Kirk Sullivan 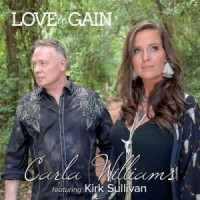 MOBILE, Alabama-based country and pop singer Carla Williams will be releasing on 22nd February a duet with Kirk Sullivan, who in the '80s won eight Dove Awards as a member of the hit CCM group 4Him. "Love To Gain" was written by Williams and hitmaking songwriter Steve Dorff. Said Carla, "I was on a flight back from Los Angeles and the lyrics just poured out of me. I was reflecting on all of the amazing experiences I had encountered in such a short period of time. As soon as I landed, I texted Steve and told him I had lyrics, now I needed music. He flawlessly wrote the most beautiful melody. I sat this song on a shelf for 10 years and ran into Kirk from 4Him at another airport. We talked about how we should sing or write together and that's when I realised that 'Love To Gain' was about to come to life."