Love Will Find A Way 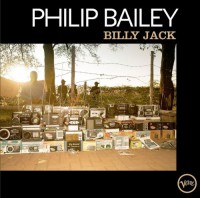 NUMEROUS musical luminaries including Kamasi Washington, Robert Glasper, will.i.am, Chick Corea, Christian Scott, Bilal, Christian McBride and Steve Gadd are featured on the new solo album by Earth, Wind & Fire man Philip Bailey. 'Love Will Find A Way' is released by Verve Records on 21st June. The first single from the project is "Billy Jack", a Curtis Mayfield song. Read a press release, "The album came together over a two-year period and was initiated after Bailey started becoming aware of this forward-looking, all-embracing jazz generation. He'd heard Rob Glasper was giving jazz a facelift. Bailey quickly brought Glasper on board to play on and produce some tracks, and he became invaluable to the singer in recruiting musicians and other decisions. But Bailey also continued with his own research. At Jazz Fest in New Orleans, he made a point of catching Kamasi Washington's set and had a small-world moment. Bailey said, 'Lo and behold, he introduced his father, [the woodwinds player Rickey Washington]. Me and Rickey had known each other for years! We went to the same church! Kamasi went to Bible school with my kids.'"