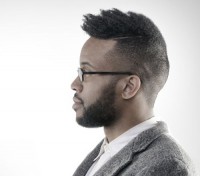 RAPPERS James Gardin and Ozay Moore have collaborated on Gardin's single "Funky Funky Fresh (ftg Ozay Moore)". The track was produced by TheyCallMeHeat and released through Illect Recordings. Read a press release, "The two rhymesayers trade unconventional styles with stanzas that are purposefully palatable yet have an unsuspecting thread of confidence running through them. The assortment of poignant and philosophical gems peppered across its soundscape include lamentations on the afterlife, the preservation of cultural art forms and much more."