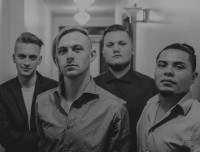 THE POST hardcore/heavy rock quartet from Salt Lake City, Utah, Dream Collage have released a 10-song album, 'Ripple Effect'. The band were formed in 2015 with the mission "to create, inspire and activate a culture of like-minded individuals who aren't afraid to act upon the dreams and visions that have been placed inside of them."