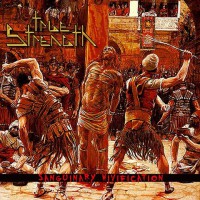 THE AMERICAN metal band True Strength are having their third full-length studio album, 'Sanguinary Vivification', released in both digital and CD format by Roxx Records on 19th April. Recorded in 2017, True Strength were dissatisfied with the vocal performance on 'Steel Evangelist' and decided to bring in a guest vocalist. Finally, the group were able to get in touch with Zandelle's vocalist, George Tsalikis, and he completed the vocals for 'Sanguinary Vivification' in January 2019.