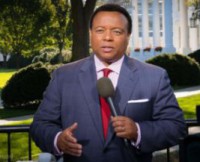 THE AFRICAN American Kelly Wright, who for three decades has been a TV news anchorman on America's Fox News, has released a new Southern gospel album through Daywind Records. 'Songs Of Inspiration' was produced by Gary Prim and features such evergreens as "Amazing Grace", "Jesus Loves Me" and "Blessed Assurance". A single from the project "America Great Again" was released to radio in May.