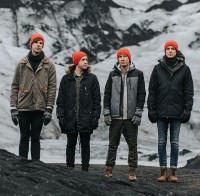 A SINGLE "He Still Does (Miracles)" is the first new track in more than two years for hitmaking pop rockers Hawk Nelson. It is from the band's album 'Miracles' to be released by Fair Trade Services on 6th April 2018. Said Hawk Nelson's frontman Jonathan Steingard, "I feel like the very existence of our band after 15 years is a miracle in itself. . . and within that miracle thousands of other miracles. . . stories of God moving in amazing ways big and small. Thinking on these things reminds me of how beautiful and special is the life we've been given as children of God - that he isn't some far-off creator who is hands-off, but an active, loving father who is present and working in our daily lives." 'Miracles' will be the band's eighth studio album.