That Day Is Live

The Collingsworth Family release live DVD of 'That Day Is Coming' 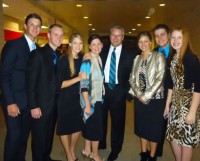 SOUTHERN GOSPEL'S popular Collingsworth Family have released a live DVD 'That Day Is Coming'. It will be issued in the UK through Authentic Media on 29th September. Read a press release, "Due to the overwhelming radio and tour success of 2015's recording 'That Day Is Coming', it became apparent that a full-length concert recording was in order. On April 21, 2017 in front of a sold-out audience at the beautiful First Wesleyan Church in High Point, North Carolina, the accompanying DVD was recorded, complete with a live band and members of the Greensboro Symphony Orchestra."