Tribute To Their Father 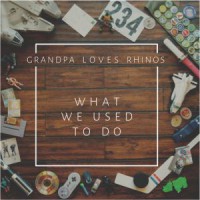 A ROCK duo consisting of Idaho-based brothers Seth and Paul Hyde, Grandpa Loves Rhinos, have released a single, "What We Used To Do". Said Seth Hyde, "Our dad passed away in January of 2001 from ALS (Lou Gehrig's Disease) - a disease that causes your muscles and speech to fail. It's re-living the memories and the things we used to do together, only to face the reality that they're gone."