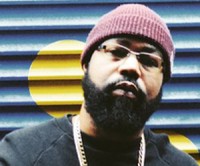 THE RAPPER and producer from Toronto, Canada, DIE-REK, has released a single, "Unpredictable (ftg Rel McCoy)", through Illect Recordings. Read a press release, "He gets extra personal on the track that details his journey in music and faith." The track is from DIE-REK's 'The Dying Ones' album, set to be released on 8th November.