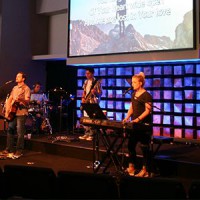 MARANATHA! MUSIC have released the debut 'Victory' by Horizon Music, a worship aggregation originating from Horizon Community Church in Tualatin, Oregon. The project was produced by Dave Lubben (Kutless, Hollyn) and Aaron Russell. Said lead pastor Stan Russell, "What if worship music could be done so well with mainstream pop sounds that it became interesting to those who haven't been willing to listen before. Pop worship that is so excellent and current that even those who don't know Jesus might be willing to give it a listen and end up enjoying it."