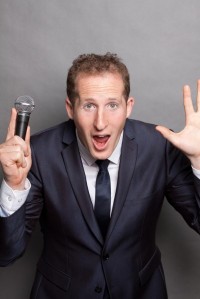 Comedian Tony Vino created the 'Clean (As Possible) Comedy Show' after asking the question, can good quality comedy be clean? Its stand-up comedy with a 12A certificate and the show has been very successful, featuring in a number of locations including the Edinburgh Festival. Along the way it's featured acts such as Paul Kerensa, Andy Kind, James Dowdeswell and Kev Orkian who was a semi-finalist on Britain's Got Talent and Pat Monaghan, winner of ITV's 'Show Me The Funny'. Chris Mountford caught up with Tony.

Chris: How long have you been doing comedy?

Tony: I've been doing comedy for just under 10 years. I trained to be a lawyer back in the day, but I thought to myself, who wants to earn Â£200 an hour - I can earn that in a week now with comedy Chris, so on reflection I thought, "Let's go for it"! Basically, after working with you guys at Cross Rhythms, I had a time in Leeds where someone got me in for a comedy show - a friend started a comedy night and I absolutely loved it and, you know, you get those moments in life where it's like a moment of destiny unfolded and I was just hooked. That was about nine years ago and that was the same night that I met my wife. It was definitely one of those nights - she was performing as well, it was her first comedy night and I haven't looked back since.

Chris: Wow, so your wife does comedy too?

Tony: Well she did, I mean she does, but the thing is I've gone full time with it and she was doing really well with it and getting gigs and everything and then I made her pregnant Chris, [laughing]

Tony: She was getting too good, I think that was it, I had to take her out. We've had two kids together. Every so often, because I do a lot of shows round the country and every so often when we get a sitter and all that kind of stuff, she comes along and she'll do a session, which is really special.

Chris: Great! And you perform in all sorts of locations, don't you, from big to small.

Tony: I mean it is a crazy life, in terms of you can be doing a festival, say CVM was the last one with a thousand guys in a tent and I've been to Greenbelt and you get 600 or 700 people at these big festival gigs and then you go to the little back room of a pub with 15 people and a dog and the dog is asleep, or it can just be a few people gathered round in a Church Hall - it really does vary and that's one of the great things about comedy, it's a very versatile art form.

Chris: What's the toughest crowd, is it the bigger locations or the more intimate ones?

Tony: Actually the bigger the audience, there's more people to connect with what you're doing, there's more people laughing and it's easy to create a dynamic atmosphere. So you actually have to work that little bit harder when there is only 30/40 people in the audience; you've got to put the energy in yourself. If there is any sort of awkwardness, particularly if it's not a big room, you have to dispel that awkwardness. There's also something about status as well when you are stood next to the Juke-Box in a pub with a karaoke microphone and people are eating and there's 30 of them, there's no sort of status there, whereas if you're in a big show and you've got 500 people in the audience and it's all set up perfectly then they're concentrating...

Chris: They are ready to be entertained?

Chris: I'd imagine those smaller locations are great proving ground and a place to test and refine your skills though?