Confronting The Glass Ceiling For Women In The Church

Legislation to allow women to become bishops was dramatically defeated by just six votes in 2012 in the Church of England. In response a statement from Women and the Church (WATCH), which campaigns for women in the episcopate read, "This vote is a missed opportunity for a whole generation to see women and men sharing fully in the mission, ministry and leadership of the Church of England."

Shortly after this result, Danny Silk from Reading California released his book Powerful & Free: Confronting The Glass Ceiling For Women In The Church. Powerful and Free is a call to address the structural message of inequality. It is not a theological treatise on the biblical case for female leaders, rather, it is an appeal to the hearts of men and women to recognise the existence of the glass ceiling for women and to challenge themselves to align more fully with a Kingdom vision for gender-blind leadership in the body and equal male-female partnership in the home. Emily Graves spoke with him to find out more.

Emily: I'm going to start off with a quote that's from the start of your book, from Rena Peterson; she says that a girl can grow up to be almost being anything today; the commander of a NASA space station like Elaine Collins, or Secretary of State like Condoleezza Rice, or the Fortune Five Hundred CEO like Anne McCorbie; but not a minister or a teacher of some of the larger Christian denominations. If I was someone who didn't go to church, how would you explain to me why this has happened?

Danny: I think this happens because there is such a powerful force in tradition and religious environments do probably the best job in the world at protecting tradition. It's connected to our understanding truth and so we hold on to that tradition and we actually invite oppression into our environment.

Emily: How is this something that can be changed in society today?

Danny: I think we have to hold things up to the light and be willing to talk about it and be willing to stir our traditions; otherwise we begin to identify ourselves based on how we have always done things and sometimes it puts a choke on certain groups in our environment.

Emily: One of the issues that has been big in the news in the UK is about women bishops. What is your opinion on this?

Danny: I'm not that familiar with Anglican and different denominational hierarchy and I am not even familiar with their specific arguments. I just know in the US it is a less formal dialog; it's more behind the scenes where we just refuse to allow women to be as powerful as men.

Emily: From reading your book one thing is very clear, that you have a real passion for empowering and encouraging women to be leaders, whether that's in the church or just in general, in whatever part of their life, but why is equality so important to you?

Emily: Do you think that society in general has given more room for women to be who they are as time has gone by? 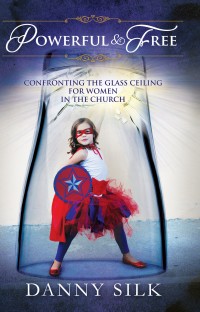 Danny: I think there's some movement. Obviously there's a lot pressure to allow women to be who they are, but there are some environments where the men are actively enforcing what they would call a scriptural interpretation where women are not allowed to be powerful, but I think the biggest issue and the reason why I wrote this book, is that a lot of men don't seem to be very interested in the topic. They are under educated. They are under researched and they are just apathetic towards the subject.

Emily: In your book you look at what the Bible says about women leaders. Would you mind just sharing a little about some of the battles that are in the Bible for women?

Danny: There are four key scriptures that are really a dialogue between the apostle Paul and Timothy his disciple and most of what they are doing is they're confronting issues in the Corinthian Church; but we've taken those scriptures of 'I don't allow women to speak in church' and we have taken that and twisted it into some generalisation towards females. There's been so little fellowship or research into the scholarships that are available. I mean hundreds of theological books written to address these troubled scriptures.

Complimentarianism is a "tradition of men". Read The House of Deborah (http://heavensroar.org/deborah.html) for in depth study from leading global scholars addressing the issues that have been twisted by men. Thorns from the cursed ground and male rulership were both stated by God in the same verse as being a direct result of sin. Those seeking male primacy should also being praying for the ground to bring forth thorns. They follow the path of sin. The apostles overturned it - the bishops restored it and by 300AD women were banned again from leadership.
Time God's people stopped following the curse of sin and humbled themselves before God. It's hard to climb off a pedestal.

Danny is presupposing that complementarianism (i.e. that the position of elder/pastor is limited to men) is based upon male insecurity and sticking with tradition, which is a rather simplistic and flawed argument.

I've extensively studied this issue, and I know for a fact that the vast majority of men and women who advocate a complementarian viewpoint hold it as a result of careful study of the bible, just as the majority of egalitarian theologians hold their views based upon their careful study of the bible. It is a tricky issue to navigate, and I think it must be approached with respect and grace.