Do Lent Generously: 40 days of giving back, doing good and living generously 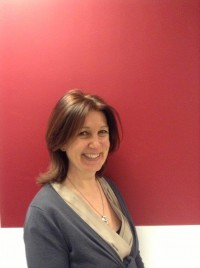 40acts is the triple award-winning challenge from Christian charity Stewardship that invites people to do Lent generously.

Lent is usually about 'giving stuff up', but they are adding something transformational to the traditional, making Lent a preparation for a lifetime of big-heartedness.

For three years they have encouraged individuals to take a daily challenge: 40 nudges in a generous direction, alongside 40 blogs to read and ponder and as Lent once again approaches, Chris Mountford spoke with Debbie Wright, Stewardship's Head of Content to find out more.

Chris: Tell me a bit about 40acts. Give me an overview.

Debbie: The idea behind 40acts is that Christians often want to do something for Lent, so they think, 'What can I do?' The usual thing is people give up things, so they give up caffeine or chocolate or Facebook and it's become almost like a health kick thing, which begs the question, 'Who are you doing it for?' I thought about four years ago, 'Hmmm, Lent'. I'm working for Stewardship, which is all about generosity and so I thought that rather than giving up something, why don't you give out something for each day of Lent? So that's where the idea came from. We called it 40acts as obviously Lent is 40 days and it's an act because each day we are challenging people that sign up to do a generous act for each day of Lent.

Chris: In the last few years as that's developed, it's grown and grown, I presume?

Debbie: It really has; it's really captured a nerve actually. I think people thought, 'Well, I can still give up my chocolate, I can still give up my morning coffee', but actually what we're then saying to people is that you can take that money that you would spend on that chocolate or that coffee and add it up, save it for each day of Lent and then do something with it, which can be hold a street party, invite your friends round, take some friends to the cinema or obviously give it away to a charity. It's caught a nerve because we started off with about 2,000 followers in 2011 and so far - Lent hasn't actually started - but 17,000 people have pretty much signed up to take part in the Lent challenge this year.

Chris: I guess the idea is to do it for the whole of the Lent period, but it's something you could do even if you're a week or so late?

Debbie: Absolutely. How it works is you can go to our website - 40acts.org.uk - and you can do it any time: at the beginning of Lent, now, or even halfway through - and you get sent an e-mail each day, which is like a little thought for the day with a Bible verse and something to make you think, which you can obviously read on your phone or at your computer at work or when you get back in the evening. Then there's a little challenge: to do something like surprise somebody or pay a compliment or some bigger ones as well: ask to pray for somebody. People either do the same thing for every day of Lent or they look to see what's going to be coming up and do that challenge each day.

Chris: So you're providing a little bit of inspiration?

Debbie: Absolutely. In fact on the website already you can go on there and see all 40 challenges. You can't read the blogs yet - you need to sign up for those - but you can actually see what the different daily challenges are. They actually get harder, so as we move on towards Easter, and certainly during that Passion week, there are some really quite tricky ones to do, so we hope people will really have got into the swing of things by then.

Chris: I'm guessing you've done this in previous years. Tell me some stories of how you found it. 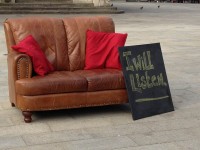 Debbie: At Stewardship we try and live out what we state, so I work with a bunch of fantastic individuals who have really taken the 40acts challenge on board. People in the office have done some great things. One person decided two years ago that she was going to do something anonymously every day - not just to work colleagues but to maybe even strangers or passers-by or family - so she donated small things, like someone's favourite bar of chocolate, some cinema tickets, perhaps someone's favourite coffee, and this really caught a nerve, so people around the office started donating, leaving little gifts on people's desks and it seemed to culminate with somebody being given a Kindle, so that worked really well!

Debbie: Then another person really thought it through and thought, 'I know what I want to do for each day of Lent: I'm going to write a thank-you note to all kinds of people in my life'. So she bought all of the cards, the envelopes and the stamps and then wrote thank-you notes to former work colleagues, people in her wider family and teachers, just to express her gratitude for the things that they'd done for her in the past. It was a real journey she went on and she had some amazing responses back from that.

Chris: Obviously Lent runs up to Easter. Do you feel that generosity ties in to all of the message of that?

Debbie: Absolutely, because I think what Jesus did for us, none of us can ever really begin to fathom. He gave his life for us, which has to be the ultimate act of generosity. So we're looking really at that aspect of Jesus giving his life, giving us the gift of life and what we can do in return. Some of the harder challenges that week are to do things like spending a day trying to share your testimony, or also forgiveness; there may be somebody out there you really feel you need to forgive. Those challenges in Passion week are much bigger.

Chris: There are some great organisations partnering with you on this and some good people, famous names, contributing to the blog. Remind us of the details where people can find out all the information.

Debbie: Yes, you go to 40acts.org.uk and you can sign up as an individual. Or if you're a church leader or a family or you run a youth group, we've got a new thing this year called 40acts Together, where you can get some absolutely fantastic resources: practical things, prayers, Bible studies, sermon notes; even for schools there's some assemblies and how a school can do 40acts Together. There's lots of new material there for people perhaps coming back to the website for a second time.

I LOVE THIS. I did this last year where I said, I don't want to give up something, I want to do more of something. I can't exactly recall what I did last year. But I love this. I need to do more research where it says we can sign up and get an email. Here is an idea. I had done this when I was working part time as a cashier at an arts and craft store. I had birthday cards in my drawer one for boy one for girl. Kids love to tell you it's their birthday. So when they would, I would have a card for them. The odd thing was, once I had that, none of the kids told me. Then I stopped bringing the cards and then of course a child tells me it's their bday. I don't work part time there anymore, but if I did I would still do it. I saw a young man collecting aluminum cans about 3 weeks ago. He was partially paralyzed on his left side, but he was at least trying to help himself. I couldn't turn around and said next time I will give him my cans. I seen him and sure enough, I stopped. He was so happy. Yesterday I stopped to help a man and his daughter when their car stopped working on the side of the road. Just sample of simple nice things we can do for others.