Jeff Short chats to Will Morris about how COVID-19 is affecting the work he does at House Of Bread and how during these times of adversity comes opportunity. 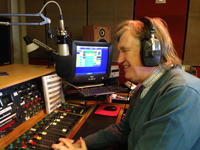 Jeff: At the House of Bread you do a lot of face-to-face work normally, don't you? I'm assuming that can't be happening.

Will: No. It is all a bit strange. In the last 4 to 5 weeks we've basically changed the entire way we operate. You're right, we were all about social inclusion, coming to our cafe, hanging out and now we've had to reverse that. We are now doing deliveries, thanks to a lot of support from the local community, both the wider community but also the faith community. We have Stafford Rugby Club, for example, who really have stepped up and they do all our deliveries and collections. And we are now able to launch our telephone support line called the Breadline, which is basically social engagement over the telephone. This is amazing. We've identified around 75 of the most vulnerable of the people that we support and they get allocated a support worker and we're in a position to phone people as the level of need is there to talk about things in their world, make sure they are being supported by the agencies that are local to them and just connecting in a very different way. This is going to expand way beyond our current lockdown situation; it's something we've been looking at doing for about a year and a half and never really getting the impetus to make it happen. And now, of course, under adversity, comes opportunity. So we're excited, challenged and obviously frustrated like everybody else sitting at home. But unlike everybody sitting at home we are busy at the cafe cooking up meals and getting them delivered.

Jeff: That is quite an amazing thing. As you say, you consider it, you don't get the impetus and then this comes along as a catalyst to change. I wonder how often that story is being repeated around the country.

Will: Well, you know the definition of insanity is to do the same thing over and over again and expect a different result. I think it's a challenge to everybody to think creatively and I think it's something that's not going to go back in its box. I'm really pleased to feel that other people strongly feel the same that society recognises that we have to be different and the new normal is to step out and be more relational, to enquire about our neighbours in a genuine, regular way. So I think we are going to see a different landscape and I'm excited about that future. There are a lot of people who are disconnected and I think that's one of the things that we've found is the most worrying: the number of people who are out there who aren't connected to any group. So we're not going to let them creep away again we're hopefully going to connect them with their local communities, their local faith group, whoever it is that they need to link up with so that they don't disappear back into the anonymous amalgam of society, which is where a lot of people have been hanging out on their own.

Jeff: How are you put in touch with these people?

Will: A lot of people are contacting us, a lot of people are referrals from individuals or providers but in a lot of cases people are getting to a state where they need to make a phone call and they seem to know what we're about and they will just phone up. It's coming in from all sorts of areas and I'm really pleased that that's happening. Clearly, we've also got a lot of people who are struggling with addictions in their own lives anyway so this has meant an even greater level of confusion for them. That's a massive problem for their process of recovery. It is massively different for so many different people and I think part of where we're going in the future is to recognise that level of need, look at different ways of engaging. I'm ruthlessly optimistic as always it's just incredibly sad that it takes this sort of thing for our wider society to recognise the needs of the local community.

Jeff: And you're making new partnerships. It's fascinating you say Stafford Rugby Club, I just wondered if you are in the market for conversions.

Will: It is interesting. Specifically, we have an opportunity to share our story of faith more now than ever before and I think we're using that opportunity, as always with care, but we have much more of an opportunity to talk to people because they very often ask us why we're doing this, why we're still operating. It gives us that opportunity to talk about Jesus and God in a way that is often a challenge because they'll respond with why are we facing all of this. I often reply that mankind has turned its back on the good ways and the values we as Christians have and I think people are reflecting on that genuinely. We've had some amazing conversations with people who have gone away thinking I'll talk to these guys when we're back to normal, whatever that might mean. So, it's really exciting, massively challenging but for everybody out, there get connected. If you are somebody who could bring somebody to a connection, whatever that might be. I would really encourage people to do so. And don't be scared of talking about your faith in a way that works for that moment. I'm not suggesting that we're all 4 by 4 bibles but I am suggesting this is a real gift, a real opportunity to talk about what's drives us and what motivates us.

Jeff: I've just started doing a 5-minute sermonette on faith on Facebook. It's interesting because I've got friends from watching the football at Port Vale and when you see not only do they read it they comment, they share and one of those people commented we never have time to talk about important things until this comes along.

Will: I think it's really given people space to think about their own blessings. And although the reason we're here is challenging I really do think that people are understanding the value of silence and being in their own heads and exploring the way they live their lives. The gift of time is sometimes overloaded by distractions, isn't it? Very often we think we're on our own with thinking time but the world is travelling very quickly but the world has stopped, pretty much, and I think these are the sorts of things where people are re-evaluating where they stand and where they sit and I think they also recognise how fortunate they are. Maybe all of those things are coming together and people are reflecting. I thank God for this time for reflection for people whoever you are, whether you are on the journey of faith or not it's a real question to evaluate where you sit in society.

Jeff: We played the song Diamond in the Rough on the show and I think some people are the diamond in the rough or the circumstance that it has hatched out has become a diamond in what looked a rough place.

Will: I think you're absolutely right. For a lot of people they will be different, they will embody that change, they will recognise what's happened. And I think it's the same with the view of the planet we live on. I think people do recognise that it is a treasured blessed planet and we need to look after it and nurture it. For folk who believe this was a gift from God this reinforces it and I often share with people the world is breathing again. I hope and pray that the transformation of the way things move forward will be different and more inclusive and more open and sharing of the resources on our planet. There shouldn't be anybody starving to death, there is enough food. Bold statements, massive dreams. But if you don't have dreams where are you? Don't get in the way of God's work.

Jeff: It does say without a vision the people perish and the fruit withers on the vine; life shrivels up without that kind of vision. Are you managing to get enough provisions and food to take out to these people?

Will: We are amazingly blessed and the more we give away, the more comes in. It is just extraordinary. We are able not only to help the folk who are immediately connected with our services but we're able to work with a number of other local initiatives, some of faith, some not, who are looking to develop activity packs for families with children, looking for content which might include chocolate. We have been gifted a lot of chocolate based items and we are able to provide the content to other people's good works and that's great. Literally, the more we give away, the more we receive. Yes, it's been a challenge and yes, we've come close to the wire but we've never ever run out in 10 years. And in the current climate, the choice of what is available has increased, particularly fresh and dairy products with high vitamin content which is really important. It's a really blessed example of God's provision because without his hand on our work we are nothing.

Jeff: Think you must have a solar panel on you that gives you energy! No, I know the source of that light and that power. Thank you for coming on and sharing your story.

Will: Thank you for the opportunity to share. Thank you to everybody who's out there praying. Please pray for all people in need, particularly those who are the most vulnerable in our society, they are struggling more than most. I know everybody is but for a lot of our friends, which is what we call our clients, we don't use that word, they are really desperate, really confused so they need prayer more than anybody else. Thank you so much.