Steve Kohagen looks at how we define ourselves 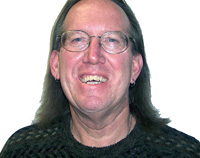 I recently traveled overseas for several weeks, and was required to complete a mountain of paperwork to acquire the necessary letters of invitation, visas, airline tickets, travel insurance, and so on. Countless times I had to provide the same information to differing agencies - my birth date, sex, nationality, passport number, driver's license, social security number, address, phone number, occupation, and reason for traveling. This was then all cross checked and researched to ensure I was the real me and not some poser.

As I was repeatedly regurgitating the same numbers, it struck me that all this mundane data described WHAT I was, but not WHO I was. Every time I crossed a national border or entered an airport, I was asked to provide proof of my identity - actually, really just some papers and a photo that proved I was indeed a big, ugly American tourist and which failed to prevent me from being aggressively searched more than once. Not one iota revealed my heart, soul, or spirit.

The great Swedish philosopher Carl Jung once wrote, "The world will ask you who you are. If you don't have an answer, IT will tell you who you are." Our secular culture has great expertise in telling us who we should be...Baby Boomers, Gen X, Gen Y, Millennium Gen, MySpace Gen, ad infinitum, ad nauseum. It neatly collects all of our facts, wraps them up in a pretty package, and then markets us to the media - and the media to us. Much of what we eat, wear, watch, listen to, and drive is based on a phony identity foisted upon us by those who know nothing of what truly beats in our heart of hearts.

Although our ID has been robbed by society at large, there IS a remedy for winning it back. Many years ago a man named Paul wrote a letter to some friends in another city, Ephesus, to encourage them in just such a matter. He reminded them that "You are His Workmanship (literally 'poem'), created in Christ Jesus to walk in the good works God has already prepared for you." Our true identity, our unique story, and our individual destiny are not to be found in some slick marketing propaganda, but instead in the heart of our Father who lovingly fashioned us with His plans and purposes in mind.

Are you struggling with who you are and who you want to become? Simply ask your Maker to reveal your true identity to you. When the world next poses Jung's question, you can boldly and confidently reply that you are the Image Bearer of the One who Created you, Loved you, and Died for you - and that you bear His name as you wear the ID of a Christian.

The opinions expressed in this article are not necessarily those held by Cross Rhythms. Any expressed views were accurate at the time of publishing but may or may not reflect the views of the individuals concerned at a later date.
About Steve Kohagen

Steven Kohagen is the Director of Acolyte International. A veteran of the Jesus Movement, he has worked in various capacities over the past 30 years in music, missions, media, and marketplace ministry. When not traveling, he resides in Seattle, WA.

View all articles by Steve Kohagen