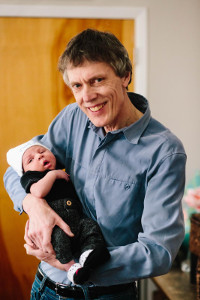 These are the days of great passion. For the last few weeks our media has been filled with images and voices of people calling passionately for change. Myself and members of my family joined hundreds of others in the city centre of Liverpool - keeping socially distanced as much as possible - in protest against the police brutality experienced by African Americans in the USA, and calling for the need for societal change in our own country too.

Last year the attention of the world was captured by the passionate voice of an extraordinary young lady, Greta Thunberg, who called world leaders to account for the current environmental crisis.

Yet above these different crises that our world is groaning under, there is I believe one of even greater urgency that faces every man, woman and child on this planet. I haven't heard any voices in the media shouting the alarm on this one. I hope you will let me tell you in just a few minutes about my passion. It is something which, if I was given the grace, I would die for. You may be offended by what I'm about to say. All I can say is that that is not my intention. I simply want to share my heart with you openly and honestly, because I care that you have the opportunity to hear it.

These days, if you have the right social media connections or if you get picked up by the news media, your story can race around the world in a matter of minutes. Two thousand years ago they didn't have that luxury. If you wanted to tell people of something of earth-shattering importance, you had to speak openly in public, you had to travel, you might face imprisonment, beatings, floggings, revilings, shipwrecks, and torturous execution. But a certain group of people did just that. Because they were passionate about the urgency of proclaiming the news of the death of one man who they claimed was God, and who they claimed had died for every single man, woman and child who has ever lived, and more than that, who they claimed had risen from the dead. Those claims have been made about no-one else in the whole of human history. They are either insanely false or insanely true. They can't be anywhere in between.

Two thousand years ago that news shook the Roman Empire, and it has shaken our world ever since. It has confounded kings, and it has given hope to the humble. It has caused thousands of believers across the centuries to sacrifice their lives in the cause of spreading this news. Behind the walls of the Iron Curtain, or in the modern day prisons of communist China, believers have been tortured, suffered and died for their beliefs. Let me give you just one example from many, many across the centuries who have chosen this path.

Anne Askew lived in the reign of King Henry VIII. She was outspoken as a 'gospeler'. She was a very learned and intelligent woman. She was arrested, imprisoned, and put on the rack - in fact she is the only woman on record to have been tortured in the Tower of London (http://historysheroes). She refused to renounce her beliefs, or give any names to her torturers which would implicate others. After her torture, she could no longer walk, and she had to be carried to her execution in a chair. She was chained to the stake to make sure she stayed upright. Once more she refused to recant. She was burned at the stake surrounded by a large crowd. She was just twenty five years old.

Why have people across the centuries gone through those ordeals, and why do they still go through them? Are they all mad? Are they and all who share their belief completely conned by the biggest deception the world has ever seen? Intellectual young women like Anne Askew, or world-changers like Martin Luther King - was their courage and biblical faith all based on a fallacy? Or have they seen and experienced something which actually is out of this world?

If we believe in the importance of history - and the passion of millions of people around the world over the last two weeks suggests, rightly, that we do believe history is important, we cannot afford to ignore the most single influential event in the whole of history, and what it means for us today.

The centre of all this is one man. Jesus of Nazareth. He died an innocent death at the hands of cruel oppressors. The leaders of his own people clamoured for his execution. Yet he chose to go to that death. And his death had been prophesied in sacred writings from a thousand years before. It's the equivalent of someone at the time of the Norman Conquest predicting precise details of 9/11.

So why was his death so pivotal in human history? It was because all of the injustice, all of the oppression, all of the pain, all of the selfishness of humankind pointed to one thing. That one thing, in the Bible, is called sin. As human beings we are extraordinarily beautiful and complex. We are capable of astonishing bravery, compassion, selflessness and self-sacrifice, and yet we are also capable of self-centredness, evil and the grossest of depravity. It is the irony of the human condition. The Bible tells us that God has made each of us uniquely, wonderfully, lovingly, intricately, intimately, purposefully, in his very own image, to know his indescribable love and to reflect his glory. Yet each one of us has put ourself before him. We have put our needs, our desires and our priorities before his, and indeed before those of our fellow humans. We have wrecked the plan.

I can remember when I was eleven, in my first couple of weeks of secondary school, when I was feeling very insecure and vulnerable, I found a friend. He was more cool than the one friend from my primary school who had joined my secondary school with me. So one lunchtime I told my old friend from my primary school that I was going to spend the lunchtime with my new cool friend, and my old friend couldn't join us. He had to go and spend the lunchtime - and it was a long lunchtime - somewhere else, and find someone else. That was sin. It was self-centredness. It was born out of a desire for self-preservation, acceptance and significance, but its causes made it no less sin, and no less hurtful.

The Bible tells us we have all sinned. We may not have murdered or raped anyone, but we are all guilty of those little acts, or bigger acts, where we have put ourselves before others, and contributed to the hurt and pain in this world. And apart from those specific acts, what about those secret thoughts in our heart about others, those thoughts that would fill us with shame if they were broadcast abroad on social media?

Many years ago I came to the realisation that I was a prisoner - I was trapped by a self-centredness - a me-centredness - which ultimately motivated all my behaviour and relationships. And there was nothing I could do about it.

But here's the urgency. Like the passionate call of protestors over the last few weeks to remember the cries of history, there is a shout that rings forth from two thousand years ago that demands our attention. For not only did a man hang butchered and bleeding for you and me on a Roman cross just outside Jerusalem, a man from a despised and oppressed race, but also that same man rose from the dead three days later. And not only that, but he promises to return. And we will be judged, not according to whether we have been a nice person or whether we have been good in our own eyes, but according to whether we have received his supreme act of sacrifice for us, or ignored it. Did we stay in our human pride which refuses to recognise our need for a saviour, or did we recognise that our greatest enemy is within ourselves, and that we need saving from it?

My passion is that people should know this reality. A reality that countless people have died for over the last two millennia. This news is so important that people in our own country were burned and executed for spreading it.

And it is good news. Though it offends our pride, if we receive it we will find ourselves embraced by the most loving, the most kind, the most gentle, the most tender, the most compassionate and the most beautiful person we have ever known. He will reach the deepest parts of our soul that no other human experience or relationship can satisfy.

That is my passion. That you would know him.

The opinions expressed in this article are not necessarily those held by Cross Rhythms. Any expressed views were accurate at the time of publishing but may or may not reflect the views of the individuals concerned at a later date.
About Mike Farrington

Mike Farrington was a member of the original pioneering team which launched Crossrhythms City Radio in Stoke-on-Trent in 2002. Between 2002 and 2006 he presented the ground-breaking Community Vision programme, engaging with community organisations, and civic and political leaders in the local area. Before that he worked for five years as a presenter for United Christian Broadcasters. Mike's original training was as a teacher, and for the past twelve years Mike has been teaching at a Christian school in Liverpool, equipping young people to serve Christ in today's world. Mike is married to Mary; he has six adult children and three (at the moment!) grandchildren.

View all articles by Mike Farrington