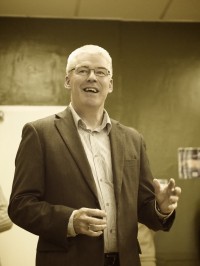 On June 25th-27th a major conference will take place in Stoke-on-Trent with Argentinian church leader Ed Silvoso coming to the city as the main speaker at an event which will generate national level interest.

Ed Silvoso is a highly influential and respected leader with a particular emphasis and understanding on how the church can bring about transformation in society through engaging in the marketplace.

Chris Mountford spoke with Robert Mountford, his Dad, who is an author, Director of City Vision and one of the hosts for the Transformation conference. They chatted about the journey of prayer for city transformation and the forthcoming conference.

Chris: Tell me a bit about the Transformation conference.

Robert: In Stoke-on-Trent over a lot of years, we've been working towards seeing the city transformed. We've been praying about that issue over many years in all sorts of citywide meetings, small and large and all sorts of venues; trying to build connections to community leaders and political leaders and civic leaders; trying to be involved in every aspect of the life of the city, whether at a leadership level or on the ground. This is obviously helped through Street Pastors and Night Church and Foodbank and through all sorts of things where it's dealing with anyone and everyone around the city.

We felt that Ed Silvoso has probably had unmatched experience around the world, of thinking, speaking, listening and working in the area of transformation of cities and towns and countries. Over the last 20 or 30 years, Ed Silvoso's been speaking on this and pioneering and leading the way. We felt for us in Stoke-on-Trent he's a man who maybe, with God's help, can come in and really help us to move forward on the journey we're already on. Hopefully he won't be saying anything that's new to us like, well we never thought about that before; but what he will be saying to us is taking us further down the line, opening our understanding more and giving us real encouragement, with concrete examples and illustrations that will lift our vision and help us to take the next step or two forwards.

Robert: Yes, absolutely. The church is already doing that to some degree. I'm thinking of people like the YMCA, or Night Church, or the Foodbanks and so on. There's a Christian base to it, but it doesn't look anything like church in its historical sense; very much like Cross Rhythms in a completely different sort of way, where it's an unashamedly Christian radio station, but then it's not banging on all the time about here's a verse from the Bible or whatever. It's then from that Christian base connecting with young people; connecting with city leaders and so the whole focus is outward caring about how we can improve the quality of life in the city; how we can see transformation happen and how we can see things improved. This conference hopefully will link together all those sorts of people who are working in business chaplaincy here and outreach on the streets there and helping the poor and needy here, or Cross Rhythms there, or the Beacon House of Prayer there, local churches there; every aspect of church and the kingdom of God celebrating together and saying, we're on that journey, let's take a few more steps forward and see what God wants to do through his people in the arena of everyday life in the city.

Chris: There are a number of UK speakers at the conference as well as Ed Silvoso, maybe pick out one or two and give us a summary of what they might be bringing.

Robert: Lloyd Cooke and I have invited these folk to come along and be with us because they represent similar and very varied types of Christian ministry. There's Jonathan Olayede who leads the National Days of Prayer that takes place in large football stadiums and other large scale meetings. Ian Cole is leader of the World Prayer Centre in Birmingham. Those speakers are coming to us from the prayer aspect. Then there's other folk like Matt Bird who leads the Cinnamon Network and Roger Sutton who leads the Gather Network and their focus isn't quite so much on the prayer angle, they are very much the networkers. They're trying to link together people across the nation who are involved in these community connection things. They're the ones who are helping people to share the stories; learn good practise and expand their own vision. There are some prayer leaders and there are some networkers who are coming to share with us and they'll be able to do maybe more than Ed Silvoso will be able to do. These other visitors will be able to give us an insight into what's going on around our own nation and our own region.

Chris: Do you know what you'll be doing?

Robert: Lloyd Cooke and I will be emceeing the conference and introducing sessions. Then I think on the final morning I'll be doing something like a devotional Bible input. I'm not there really as a speaker to say I've got this big revelation, or I've written this book. I'm there to help ease it through along with Lloyd.

Chris: You have written a book recently all about St. Chad and the impact that he had in our region in the Anglo Saxon times, in establishing the Christian church locally. Do you find, when you look back in history, there have been key moments where Christian people have made a significant impact in transforming the world that they live in?

Robert: Yes, absolutely. Chad is a perfect case in point, because he's the person who is most identified with the very first arrival of Christian faith in what's now Staffordshire and the West Midlands; Shropshire and then through the East Midlands; what was then called Mercia. Chad in the 660s and 670s AD was a huge man of prayer; a man of study and reflection on the one hand, but yet he was a man who befriended the King and the man who met all the rulers of society.

He was also a man who would give away whatever he had to the poor. In his day, on one hand he was a man of faith and prayer and vision and a heart for God, but on the other hand we know by definite example and record that he connected with people from the highest to the lowest in society.

Going back to his day he was setting out to transform society from pagan to Christian, which he and his friends accomplished so successfully that 1,350 years later there's never been a time in the intervening years when English society and British society has not been Christian. It's never become pagan again, or it's never been Buddhist, or Islamic, or anything; it's just been Christian. Chad incredibly transformed his society.

Much more recently we've got examples in Stoke-on-Trent, mostly of the Methodists through many generations, who were great people of worship, prayer, listening to preaching, studying the Bible and Christian discipline. It was the Methodists who also helped the people who were poor and needy, who visited the sick, who formed trade unions to try and improve the lots of the workers and built education in its very earliest form in our society through Sunday schools. Methodists we could also say were hugely spiritual Christian people on the one hand and yet on the other hand they weren't inward looking; they then turned that faith out into society and said, how does this impact education; how does it impact health care; how does it impact politics and the governing of life? There are many examples through history and I think we're just trying in our 21st century way to say, this is nothing new, but how do we work this out in our time and in our place?

You can find out more about the Transformation conference on the Saltbox website.

You can buy Robert's book The Mantle of Chad from Cross Rhythms Direct for ONLY Â£7.59.