Recovering From A Troubled Childhood And Gambling Problem 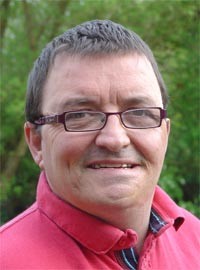 Peter Gladwin was barely one when a domestic fire left him horribly scarred. The third of eight children, he was raised on a rough council estate in Halifax.

Peter was always in trouble with the police, in and out of care homes, spending his time on the streets. Then he was stabbed and effectively lost the use of his right arm. Every relationship failed. For years Peter took refuge in gambling, drinking and drugs.

His life was dramatically turned around, following a telephone conversation with his sister, who had just become a Christian.

Chris Mountford caught up with Peter to hear his life story.

Chris: How did life begin for you?

Peter: I've been through quite a bit of adversity in my life. At one year old I was burnt in a house fire. A piece of coal fell out of the fire and landed on some paper and unfortunately I was left on the rug without the fireguard being put in place and as a result I was seriously burnt. I've got partially amputated feet; my left hand fingers have been amputated; 65% burns to the body. It wasn't a good start.

I grew up in quite a rough area of West Yorkshire, Halifax. I was in hospital for about four years having reconstructive surgery. After I came out of hospital I was brought up in a really rough council estate in West Yorkshire; what an experience for a child! The stuff that I saw and witnessed as a child really marred me and had an effect all the way through my life.

I developed serious problems as a teenager. At 15 I was travelling home on a bus and a gang of youths got on at the next stop. A fight broke out and I was stabbed. The guy stabbed me and stabbed my friend who was with me, in the back.

From being burnt as a child; I've been stabbed in a gang fight and I'm now thinking what next? At 24 I was drunk; I'll be honest with you, in order to forget the memories and try and anesthetise the past I turned to drugs and alcohol and as a result I made myself worse and I ended up on the streets. I was on the streets one night and I was a hit and run victim I was that drunk. I was knocked 16 foot up into the air and left for dead in the middle of the road. I got a fractured skull; a big scar; it smashed my body up and again I was back in hospital.

Chris: With these things that were going on one after another, how did you feel?

Peter: Pretty hopeless; demoralised is probably a better word for it. I'm in my twenties and yet everything seems to be against me. I really didn't fit into life; I didn't feel part of what was going on and I couldn't really settle down in a job, or a relationship, or get my life on track. I didn't have the tools emotionally and mentally to deal with the issues of the past. I wandered around hopelessly for years drinking and drug taking and trying to forget about the past, but I couldn't because as I say I was ill equipped.

Chris: You were trying to take refuge in things like drinking and drugs, but was the answer in that?

Peter: No. It was a quick fix and light relief for a few hours, but believe me, after coming round from some of these cocktail drugs and drinking sessions you'd feel 10 times worse; everything would be compounded. It really was a false illusion that drugs and alcohol could ease the pain. I always found that I had difficulty and struggled terribly with the emotional and psychological impact of what had happened to me. Drugs and alcohol were never going to heal me.

Chris: I know that you've summed up a lot of your story already, but you got to the place where you contemplated taking your own life didn't you?