The Shroud Of Turin 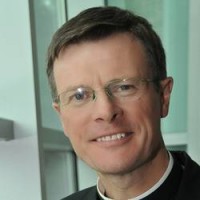 Since 2006, the Notre Dame Center in Jerusalem has displayed a permanent exhibition about the Shroud of Turin to help pilgrims gain a deeper understanding of Christ's sufferings and resurrection. Paul Calvert spoke with Father Kelly from the Shroud of Turin exhibition to find out about its history, scientific research undertaken and relevance for today.

Paul: What is the Shroud of Turin?

Father Kelly: The Shroud of Turin is an old piece of cloth made of linen. It has a unique image imprinted on it of a man on the front and back; he's completely naked. The image is life size so the shroud is about 14 feet long and a little less than four feet wide. It's like a long sheet. The claim of tradition is that this cloth covered the body of Jesus in the tomb here in Jerusalem 200 yards from where we are talking.

Paul: You have an exhibition here in Jerusalem, what can you see in the exhibition?

Paul: What is the history of the shroud? 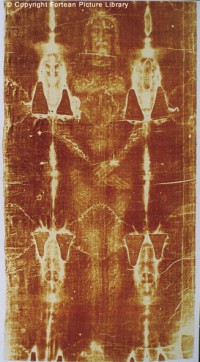 Father Kelly: The history of the shroud has a part that is very solid and confirmed and that starts in the Middle Ages, in the 1300's in France. That part of the history is absolutely confirmed historically and there is no debate about that.

Then there is the period prior to that, which is shrouded. The shroud is shrouded in a little mystery. There are many indications that point almost clearly to earlier history of the shroud and other people would say point definitively toward the earlier existence of the shroud. That part of the mystery makes it very intriguing for everybody and that is the story of Edessa, which is a real cloth which existed in Edessa. We know about this it was called the Mandylion and historians do not dispute that fact at all.

Edessa was a town that was an independent city state between the Persian Empire and the Roman Empire. In the 7th Century it fell into Muslim hands and the cloth they had there they claimed had an image of the face of Jesus. Mandylion in Greek means towel, so it was a small cloth. It also had two nicknames. It was called acheiropoietos, which means not made by human hands, which pointed toward the understanding that the image was mysterious, maybe of divine origin. The second nickname is interesting for us particularly because it is called tetra diplon meaning four-fold.

The cloth was brought to Constantinople on the 15th of August 944AD. The name was changed from Mandylion to Sindone, which is very interesting because as I said Mandilion in Greek means towel but Sindone means sheet.

In Constantinople this Sheet is exposed on Fridays and interestingly the image of the man on the shroud is marked by all the wound marks that we would expect in a depiction of the crucifixion as accounted in the gospels.

In the year 1204 it disappeared and the reason is very well known to history because that was the sad occasion of the fourth Crusade. The Crusaders destroyed the city of Constantinople and at this point the sheet is missing and we know this from a letter from the grandson of the Emperor to the Pope demanding the immediate return of the sheet. First of all that indicates the conviction of the people in Constantinople that this cloth was taken by the Crusades and the hopeless expectation that the poor Pope could do anything about that Crusade and send it back.

So the cloth/sheet disappears for all purposes and has never really been identified again under that name. Now we also know that one of the key leaders of the Crusade was Otto de la Roche. Otto de la Roche was later, Duke of Athens under the Crusader period. He was French and had a great great granddaughter who got married in Lirey in France. That's interesting because that's where the shroud story begins to be documented. Nobody denies this.

It turns out that Jeanne de Vergy's great great granddaughter has a dowry for her wedding and the dowry is the Shroud of Turin. That begs the question; could that have been stolen by her great great grandfather in the sacking of Constantinople?

Excellent article - gives the facts without drawing any assumptions or conclusions.