One of the world's most respected Bible teachers, Tony Fitzgerald brings a personal perspective as to what God is doing among young people today. 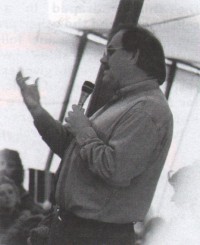 As we approach a new millennium, and the revival of God's power increases around the world, what happens in the youth generation is probably the key factor before us. Every year the average age of the population of the world is decreasing and by the turn of the century a large majority of that population will be under the age of 21. We are fast approaching a youth led world.

Over the last 18 months I have noticed, as I have ministered in different countries of the world, a quickening of the Spirit of God

taking place in the lives of many young people. There is a cry for reality, relationship, fatherhood and power, coupled with the desire to worship the Lord with all that they have within them. I have noticed an increased burden in this generation for intercession, especially to see their generation saved.

This year, I, personally, have ministered increasingly to youth as God has challenged me to focus on fathering the leaders for the next millennium. This will be a season of releasing them into their futures. I have been impressed afresh as to how young so many of the leaders in the Bible were when God got hold of their lives. Benjamin is a good example. He was a young man who lost his mother, Rachel, in childbirth. As Rachel was dying and Benjamin was being born, she named him Ben-Oni, which means 'Son of my sorrow'. Jacob, his father, called him Benjamin, which means 'Son of the right hand' (Gen 35:18). We have lived through a season where the Church has seen this generation as the 'Son of it's sorrow'. At times we have been unable to understand the way it thinks, its music, its dress and even its rebellion that has grown out of becoming a fatherless generation. But as God looks he sees it as the 'Son of the right hand'. God sees through the eyes of faith and so must the Church as we build towards this new millennium.

When the prophet went to Jesse's house to anoint a future leader, the older generation presented all that it thought were eligible. As the prophet looked he said, "Is there not another?" The other was the youngest. David was busy with his music and his occupation and the older generation had not seen the potential. There was not even a place for him in the potential line up of leadership, but the prophet looked for one more. For as the song says, "Some just saw a shepherd boy, but God saw a king."

As we move into this next millennium, we are going to see this generation move from its preoccupation to a radical leadership role in the Body of Christ. There will be a great prophetic anointing upon it and a reckless abandonment to the purposes of God. It will need fathers and mentors, but ones that release and not restrict. Young people in this generation will need to find God for themselves in the arena of faith, as they develop their own faith walk and not rely only on those who have gone before. We must trust them and not keep them in the state of eternal apprenticeship, but let their gifts mature and flow and the pioneer passion within them be fully realised.
The Church in the next millennium, I believe, will be in good hands, as God rebirths this 'Son of sorrow' generation into the 'Son of the right hand', by the power of his Spirit

The opinions expressed in this article are not necessarily those held by Cross Rhythms. Any expressed views were accurate at the time of publishing but may or may not reflect the views of the individuals concerned at a later date.
About Tony Fitzgerald

Tony Fitzgerald leads the Apostolic Team that serves a family of churches known as Church of the Nations. COTN has churches in over 30 nations. Tony is also a Consultant to the board of Cross Rhythms and a frequent speaker at Cross Rhythms Festivals. For more information you can visit the COTN Website You can also buy the 14-part series 'The Glorious Church', presented by Tony from Cross Rhythms Direct.

View all articles by Tony Fitzgerald