Jeff Short chats to author, Christy Wimber about her new book 'Wholeness', which is a powerful exploration of mental health, wholeness and healing - and the church's attitude to all of these. 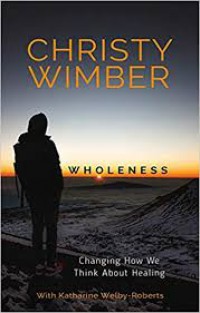 Jeff: The reason for writing this book has been born out of your own personal experience; is that right?

Christy: Yes, through various things that I've learned about, and encountered. That tends to be what happens; you go through different things and God gets your attention. That's definitely what's happened here. Kathryn and I wanted to do what we could to help give a voice to people that are often overlooked and also to equip the church in the area of wholeness and healing.

Jeff: There are some staggering statistics that you bring out in the book. Things like 50% of clergy might suffer with mental health and you point out the loneliness that those people experience. You talk about the 2013 survey where 48% of evangelical, born again Christians would think that just prayer and bible study will deal with it. These are pretty shocking statistics, aren't they?

Christy: Absolutely, and to be honest with you, they're on the rise in all kinds of different areas. Mental health in itself is such a vast conversation because we all have mental health. There is no health without mental health. But the statistics regarding mental health and various elements of what people are struggling with, what people live with day in and day out are staggering.

Jeff: But with that as the backdrop, you're quite positive in pointing out people in the bible who have struggled, such as Elijah, and the character flaws within so many of the people in the bible that we should look at and say hey, these were real people, showing their real scars.

Christy: Absolutely. One of the things that I've learned on this whole journey is that mental health is not new. If you look all through the scriptures we find many of the great leaders had various elements of mental illness and mental health struggles as well. All through church history in general you don't really find somebody who hasn't made a difference in history that hasn't had their own struggles with mental health.

Jeff: Healing, be it physical or emotional, is a sort of a hot potato in Christian circles, isn't it, because you inevitably come back to this 'why doesn't God physically cure this person?' Or just wave the wand and make that person completely whole, but you're showing healing on a much broader palette, aren't you?

Christy: Absolutely. We are such complex beings and I think we also like quick fixes. We like to have a formula and we like people to be fixed and we like to be fixed and the reality is that's just not the way this life is. This life is hard and often painful and we go through things physically, emotionally and spiritually and I think giving permission to be able to break stigma and talk about these things is really important, I believe, especially for the church. We should definitely be the place that does that.

Jeff: It's quite interesting because recently, on the national broadcast of the BBC, I heard clerics who were physically disabled saying how well-meaning but quite insensitive Christians just come up and say can I lay hands on you, can I pray for you or sometimes don't even ask, just come and put their hand on and go off in prayer, almost an object to be fixed. There is always that throw back, it appears to me, that if the person isn't healed, cured, fixed or whatever you want to say, you can throw back they didn't have enough faith. Has that been your experience?

Christy: For sure. And I really appreciated the BBC doing that article. We posted that on twitter because that is what culture is saying. Culture is saying don't try to fix me. None of us want people to be around us just to fix us. Nobody likes that. What I'm saying is that in the church, particularly in certain circles, we really do expect people to just get healed and if they're not healed then there must be something wrong with their faith. What I'm trying to bring to the forefront is saying wait a second here; there is no promise of perfection and there is no promise of an easy life.

Again, allowing ourselves to have those conversations where we're not putting our agendas on other people and using people in church or ministry to make us look better. I think that article was really great about that because it was saying stop trying to fix me; stop using me as your testimony, to make your church or your service or your leadership look powerful. We've got to stop and listen.

Jeff: You don't discount the fact there are occasions when healing takes place, you just don't presume it, I suppose.

Christy: Right. God heals. God's healing us all the time. I think God's healing us more than we realise and I believe in the miracle. I've seen miracles and I believe in them. But at the same time it is so unfair to say you have a greater faith because God healed you. I think that's where we need to redefine testimony and victory because there's just as much victory and miracle in a person that gets instantly healed as the one who lives with chronic pain and gets up every morning and has to persevere and still loves God and still does their best to serve other people. There's a lot of power in that testimony but it's not popular and that's what I want to change.

Jeff: I remember there was a lady in the church that I attend who was diagnosed with terminal cancer. We prayed for her healing; the weaker she got, the more her face shone. People would come up to her in the hospital and say what is different about you? And she became the means of people finding peace. Would somebody dare to tell me that wasn't healing?

Christy: Absolutely, that's what I believe in. Stephen modelled that for us in the bible where God's presence came upon him and as he was being stoned to death the power of God's presence is there. I think there's a powerful testimony from those living with chronic pain, mental illness, all kinds of different struggles and addiction. They need to know that how they walk that out and just doing the very best they can and still trying to follow God and still trying to do well, there's a lot of testimony in that. People don't relate to our strengths and our perfections, they relate more to our humanity.

Jeff: In one of the chapters in the book you talk about the 'spider's web of shame'; do you want to tell us a bit about that, about the part shame plays?

Christy: I think shame is so powerful and so many people live in shame. People get prayer for healing and don't get healed and there's a shame attached to that, people feel they have less faith. And there's shame attached to the things that people struggle with, the things we actually live with, some people live with great addictions and shame causes us to shrink back causing us to hide. Shame empowers isolation and when we're isolated it is very difficult to be whole. It's very difficult to walk in healing; you can't do it by yourself, it just doesn't work. What I've learnt over the years is it's most likely shame that keeps people isolated.

Jeff: How is the book being received?

Christy: Really well. There are people who will always go with the quick fixes, God does every thing now and this is heaven. And I'm like 'this had better not be heaven!' You always have a little bit of resistance and I think that's a good sign because what is happening with the book is that people are saying I feel heard and I feel I can finally put some language to some of the things that I've been struggling with. And where the church hasn't been good at some things we just need to get better at it. That has been the good response to it so far.

Jeff: Thank you for giving a voice and speaking on something where the temptation has always been to sweep it under the carpet. Not just biblical people but some contemporary people who have struggled, had to battle with depression, sometimes when we are weak, it allows God to be stronger. I very much value the book. I pray that it has the impact that it should have because if we can be more honest on this it's going to be so helpful right across the board.