Chris Mountford considers whether faithfulness is written in our hearts with permanent marker, or whether it is only faintly etched there. 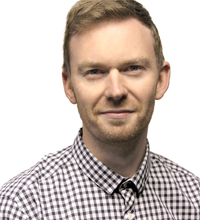 If researchers on the Family Fortunes TV show polled people about what the phrase 'being faithful' means, I would imagine that the response at top of the list would be a concept of fidelity to a boyfriend, girlfriend, husband or wife. "Our survey says."

I have been reminded recently that we should also practice being faithful in so many other ways in life. Faithful to friends, faithful in work and studies, faithful to God and His kingdom.

"Let love and faithfulness never leave you; bind them around your neck, write them on the tablet of your heart." Proverbs 3:3

I love the poetic picture in this scripture. It gets me thinking about what words and values are written on the tablet of my heart.

As a Christian, I am believing and trusting in a God who is always faithful. Faithful to Himself, to His word, to His promises, faithful to people - to me and to you. I am also trying to work out faithfulness in my everyday life and I'm inspired by some of the following stories in the Bible.

In the Old Testament, David and Jonathan are brilliant examples of friends that were faithful. Jonathan, the son of King Saul, made a commitment of deep friendship with David. He remained faithful to that friendship, providing advocacy and protection even in the midst of his father's increasing jealously and fear of the emerging leader. David was also committed to this friendship, and even after Jonathan died, David took care of Jonathan's son Mephibosheth, who was lame.

I wonder how I can be more faithful to the people who God has placed around me. To friends, people in my church and community.

Faithful in work and studies

Daniel was a man who was faithful in studying. As a young man he trained for three years under a foreign king. Daniel wanted to study in a way that was pleasing to God and sometimes this was at odds with the conventional wisdom. However, at the end of the training, King Nebuchadnezzar found no-one who could equal him, nor his friends Shadrach, Meshach or Abednego and so they were given jobs in the king's service.

It's fair to say they had some pretty huge challenges in this service, but they remained faithful even in the face of death, trusting God to be their protector. As a result, they were promoted to more influential and powerful roles.

I wonder how I can be more faithful in the places that God has located me. To the colleagues, managers, fellow students, teachers and so on.