Darren Roy considers how we can show God we love Him. 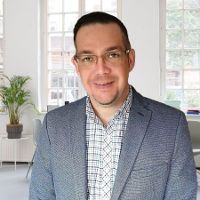 God's 'agape' love is a love that results in actions. For example, 'God so loved the world that He gave His only begotten Son.' The result of His love was the action; He gave! So if we are empowered by that same love there must be a way for us to work that out in action. The love that He has placed in us has the longing to act upon it. This is what I found when I first became a believer. God had loved me with a powerful, real, tangible love and it produced a desire in me to act upon it.

I realise that God's love motivates people to action in response to the second greatest commandment; to love our neighbours like ourselves. Many ministries have been formed on the basis of trying to fulfil this. However, the overwhelming desire I felt in my heart was to show love to the One who gave me the love in the first place. I wanted to show God I was serious about the greatest commandment; to love Him with all my heart, soul, mind and strength.

Attending church I had sung many songs about how I loved God, how I would do anything for Him, follow Him and similar expressions, which were simply bold statements without any action to back it up. With the help of some good counsel I discovered that God requires much more than just our tuneful declarations. He wants us to add actions to our words. For example, I tell my wife I love her very much, but if I don't tell her and show her the love, it doesn't mean very much. The provision, care, protection, comfort and kindness I show are some of the actions that correspond to my statement of love to her. Both words and actions are necessary.

It is the same way with God. He tells us and shows us He loves us, and He wants us to tell Him and show Him in return. Singing songs of adoration on Sunday was a way to tell Him I loved Him and this seemed to move Him to some measure. However, I wanted to show Him love. Like the ideas described in the famous '5 Love Languages' book by Gary Chapman, I wanted to know God's love language. What makes Him pleased and what actions does He like?

That's when the significance of Jesus' words in John 14:15 became so powerful to me. Jesus said clearly, 'If you really love Me, you will keep and obey My command.' It's God's love language! Obeying His commands is what proves that we really love Him. Obedience is the action that corresponds with our statements of love.

After this, rather than just declaring my love for Him, I began to seek Him for commands. Scriptures became alive to me and I could hear His still small voice speak to me personally. It's like I would hear Jesus say, "If you really love Me, do not judge your brother," or, "If You really love me, bless those who persecute you." Then practical situations would manifest where I would have an opportunity to obey. When I obeyed I felt more love from God move in and around me than I ever did singing songs. The sowing and reaping principle came into effect. This started an amazing adventure with the God who is love. In the beginning the commands that He gave seemed to relate to the way I interacted with my family. Then as I grew in love the commands related to my interactions with those in the church, later to my work colleagues and eventually I had sowed and reaped so much love through simple obedience that I was able to love my enemies.

Maybe you can begin each day by seeking Jesus for a way to express your love. What is He saying to you today? 'If you really love Me'.

The opinions expressed in this article are not necessarily those held by Cross Rhythms. Any expressed views were accurate at the time of publishing but may or may not reflect the views of the individuals concerned at a later date.
Darren Roy
Senior Minister
Emmanuel Christian Centre
Ulverston
www.emmanuelcc.org.uk


View all Life Files by Darren Roy
Sign up now to receive weekly Life Files, direct to your inbox.