The Light Of The World

James Gandon reflects on who Jesus is as the light of the world this Christmas time. 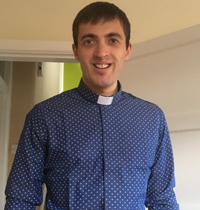 I love Christmas. I love the celebration, the joy and the opportunity for gathering as family. I love the specialness of the season as we focus on the birth of Jesus, gathering around the crib with children with tea-towels on their heads!

Our society has commercialised Christmas to the extreme. I saw a Christmas cake for sale in a supermarket back in September and I went into a major retail store at the very start of October to find no less than three fully decorated Christmas trees! On average, children have around Â£350 spent on their gifts at Christmas! There is nothing wrong with the principle of giving and receiving of gifts, having a lovely Christmas tree in your front room, or indeed settling down to listen to the Queen's speech with a mince pie, but there is also something special about how we meet with God in this season. Having journeyed through Advent in expectation, coming into church to a peaceful and quiet atmosphere to simply sing, pray and hang out with God is incredibly special.

John 1:1-13 is a passage used very commonly at Christmas; the introduction of the book describing the coming of Jesus - described as the word, life and light. It tells us that Jesus is the 'light of all mankind' and 'the true light'. Many would agree that what we see in the lives of mankind, is often darkness - violence, selfishness and greed - whereas Jesus promises to bring light. He is the light of the whole world, the beautiful blue tits fluttering around the bird feeder in the neighbour's garden, the views from the top of a hill, the sound of waves on a beach - evidence of God in our world is everywhere. My wife and I have just recently had a baby and throughout his development in the womb and the way he had changed and grown in his first few months is such a sign to me of God's amazing creativity.

A candle in a dark room when lit is a small insignificant light and yet, when we are in darkness, and we strike the match, the darkness flees to the corners of the room and this small simple seemingly insignificant light impacts the whole room. Jesus came into a dark world, as a candle in a dark room. Darkness cannot be present where the light is, Jesus comes into the dark places in our lives and in our world - and He isn't the false light of the Christmas we see around us, He is the true light that points us to God.

So this Christmas, remember that Jesus is the light, the only light, the true light - and to avoid being in darkness, we need to follow Him.

Wishing you a very light-filled Christmas.

'In the beginning was the Word, and the Word was with God, and the Word was God. He was with God in the beginning. Through him all things were made; without him nothing was made that has been made. In him was life, and that life was the light of all mankind. The light shines in the darkness, and the darkness has not overcome it. There was a man sent from God whose name was John. He came as a witness to testify concerning that light, so that through him all might believe. He himself was not the light; he came only as a witness to the light. The true light that gives light to everyone was coming into the world. He was in the world, and though the world was made through him, the world did not recognize him. He came to that which was his own, but his own did not receive him. Yet to all who did receive him, to those who believed in his name, he gave the right to become children of God - children born not of natural descent, nor of human decision or a husband's will, but born of God. (John 1:1-13)

The opinions expressed in this article are not necessarily those held by Cross Rhythms. Any expressed views were accurate at the time of publishing but may or may not reflect the views of the individuals concerned at a later date.
James Gandon
Vicar
St Andrew's Church
Stoke-On-Trent
www.standrewssneydgreen.com


View all Life Files by James Gandon
Sign up now to receive weekly Life Files, direct to your inbox.