Pepper Smith blows the cobwebs off the extraordinary history of veteran quartet the BLIND BOYS OF ALABAMA. 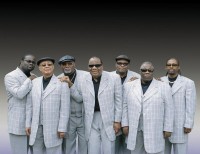 They're not boys, there's more than five of them and they're not all blind. But The Five Blind Boys Of Alabama are still living legends of gospel music who showed in the concerts in Britain last year they are awesome practitioners of the old quartet sound.

The Five Blind Boys Of Alabama have sung so well for so long they have brought the gospel to Nietzsche - Nietzsche's nightclub in Buffalo, New York, that is. Last calls are replacing altar calls as the Blind Boys discover a new audience at blues and folk festivals and in clubs. Buffalo News music critic Dale Anderson raved over the 1989 performance, "the secular met the holy . . . and the secular were moved."

The Blind Boys were having a good time, too, but they were a long way from Talladega, Alabama. In 1937 Clarence Fountain and Johnny Fields were elementary school students singing in the Talladega Institute for the Deaf and Blind Glee Club when they took four fellow members - J T Hutton, Ollice Thomas, George Scott and Vel Boxman Traylor - and started their own group, the Happy Land Jubilee Singers. Except for Hutton, all of the young men were blind. "We were real small," said Johnny Fields, who at the age of 12 was the oldest member of the group that would later become the Five Blind Boys Of Alabama.

"We pulled the better voices," he added. Four of the original members: Johnny Fields, George Scott, Ollice Thomas and Clarence Fountain are still with the group.

Another present member, Jimmy Carter, was a fellow Happy Land singer too young to tour in the forties. Talladega is about 30 miles from the gospel center of Birmingham, Alabama. Every night the young men listened to Golden Gate Quartet records on the radio.

"I think they must have been the only gospel group making records back then, because that's the only recorded gospel we heard," Fields said. Thus, the early Blind Boys sounded much like the Golden Gates.

"We sang a lot of their songs and narrative numbers like 'It's Gonna Rain'."

The Happy Land Singers left home in 1944 as they were developing a new sound with a harder, driving beat.

"It was a forties sound." The name Happy Land Singers was soon changed to something more in line with what people found remarkable about the group. Fans would see five men wearing dark glasses exit a limousine and shout, "There go the Blind Boys."

Fields remembers that such encounters were so frequent that the group co-opted the name, The Five Blind Boys.

The Five Blind Boys Of Alabama and the Five Blind Boys Of Mississippi both added their respective states to their names upon discovering one another's existence. "Until we met in the middle 1940s we didn't realise there was another Blind Boys." Later in the mid-'50s, the two groups did a nationwide tour that hyped a Battle of the Blind Boys. There was a friendly rivalry between the two groups. "It was the type of thing that when you go on stage you do your best to maintain your whatever, but off stage we were friends. "Alabama Blind Boys lead singer Clarence Fountain recalls, "We made money with that. We racked up. I must have had $5,000 in my pocket by December. In 1955, that was mighty good." By that time the group had been nationally recognised for several years. They began recording on Coleman Records in 1948 and by 1949 the group had a national hit.

"I Can See Everybody's Mother But Mine". The group followed up in 1950 with several singles for Palda Records including: "Sweet Honey In The Rock", "Leaning On Mother's Prayers" and "Come Over Here, The Table's Spread". In 1953 the band was signed by Specialty Records. Among Specialty releases were: