Blind Boys Of Alabama: Still bringing the Good News to the people

On 1st October Sony Masterworks will be releasing the latest album by the Blind Boys Of Alabama and there seems little doubt that the album will do what many of the veteran group's last couple of decades of albums have done, and introduce new people to the soulful fire and rich harmony of gospel music. The album 'I'll Find A Way' is produced by Justin Vernon of the Grammy Award-winning indie folk band Bon Iver and features some intriguing guests like Shara Worden (of My Brightest Diamond), Merrill Garbus (of tUnE-yArDs), Casey Dienel (of White Hinterland), folk country star Patty Griffin and Justin Vernon himself.

'I'll Find A Way' contains a fascinatingly diverse set of songs. They range from "Take Your Burden To The Lord And Leave It There" written back in the 1920s by seminal gospel composer Charles A Tinley through to "God Put A Rainbow In The Cloud" which was once a hit for country star Kitty Wells and was known to the producer through the rendition by bluegrass legends the Stanley Brothers. One particular highlight is the cover of Bob Dylan's "Every Grain Of Sand" which is recast as a soul-searching duet between the Blind Boys Of Alabama's Jimmy Carter and Vernon. Said the producer, "Jimmy and I are coming from such different places and yet we're singing about the same thing. There are two perspectives in that song, and they're colliding."

Other superlative cuts on the album are "There Will Never Be Any Peace (Until God Is Seated At The Conference Table)" - a song written by Eugene Record and originally a hit for his group The Chi-Lites; "I'll Find A Way", originally written and recorded by Motown session musician Ted Lucas; and "Take Me To The Water", originally cut by soul jazz legend Nina Simone. The latter features the stunning falsetto of Paul Beasley, the newest member of the Blind Boys Of Alabama who joined Jimmy Carter, Eric 'Ricky' McKinnie, Joey Williams, Tracy Pierce and Ben Moore for the sessions at Vernon's April Base studio in rural Wisconsin only days after he'd played his first Blind Boys Of Alabama gig. Paul is, of course, a much loved figure in gospel in his own right having performed with the Gospel Keynotes, the Mighty Clouds Of Joy and as a solo. The story goes that initially Beasley had trouble with the tune "Take Me To The Water". After some encouraging words from Carter, Beasley not only nailed a heart-stopping performance, but reduced everyone in the control room to tears. What you can't hear on the final version is his small audience erupting into shouts and applause on the other side of the glass.

As with most Blind Boys Of Alabama albums these days, not every song on their album is strictly gospel. During the time of the release of the Boys' 'Down In New Orleans' album Jimmy Carter said, "You see, some people think that gospel singers should only sing gospel songs. But we believe in songs with a positive message. Now we will never cross over into pop music and start singing love songs; people have asked us to do that many a time and we have always turned them down. We were there in the studio when Sam Cooke crossed over to pop music from the Soul Stirrers, years ago. But I am not one of those gospel singers who thinks blues and rhythm & blues is the Devil's music. No, indeed! I love the blues. I am a big fan of Blind Boy Fuller, Sonny Boy Williamson, Lightnin' Hopkins, B B King." 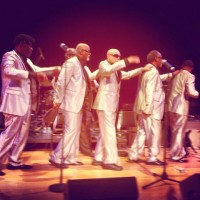 Intriguingly, Clarence Fountain, a founding member of the Blind Boys who down the years switched from baritone lead to bass, is featured on the album. Serious health problems requiring weekly kidney dialysis had prevented him from touring with the other members of the group. But though he couldn't travel to the Wisconsin sessions, the Blind Boys found a way to include him on the album, recording his robust bass vocals in Birmingham and adding them to the mix. Commented Carter, "That's an important part, that bass under everything. He gave those songs a true Blind Boys bottom. We wouldn't want to do a Blind Boys project without including Clarence. He will always be a Blind Boy even if he's not out on the road with us."

Critics seem agreed that 'I'll Find A Way' is the Blind Boys' best album for years. Clearly the veterans don't intend to stop working anytime soon. Said 82 year old Carter, "It's not just singing. We're bringing the message to the people, and that message is the good news of God. We sing from the heart, and what comes from the heart reaches the heart. If you have any feeling in you, you will feel the Blind Boys."

There's a fantastic video with Justin Vernon that shows this album being made. It's way interesting and it provides a great insight into how these musicians work. Check it out! http://smarturl.it/BBofAJVernon