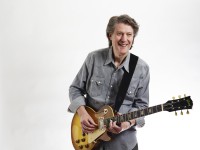 British singer/songwriter, guitarist and bluesman Bryn Haworth is a veteran of both the mainstream and Christian music scenes and is no stranger to the webpages of Cross Rhythms. His musical history cannot be contained within a single feature and down the years the Blackburn-born maestro has appeared on recordings by such diverse artists as Marianne Faithful, Gerry Rafferty and Joan Armatrading while his own albums, of which there are around 23 recorded over four decades, have contained some of the highlights of post-war Christian music.

With an obvious desire to keep moving musically, this month sees the release of 'Rebel Man' - a brand new collection which boasts a number of blues and faith-based tracks delivered with Bryn's trademark warm vocal delivery and renowned slide guitar playing that seems only to get better with age. Co-produced with Neil Costello and featuring the likes of Henry Spinetti (McCartney, Clapton) and Dave Bronze (Eric Bibb, Tom Jones) on drums and bass respectively, Bryn's new work follows hot on the heels of the 2014 prison ministry release 'Time Out' - itself a follow up to 2010's 'Inside Out' which was also was designed for distribution amongst inmates as part of a ministry that Bryn and his wife Sally have been involved in for over quarter of a century.

I catch up with Bryn just before the release of his new album to ask him how 'Rebel Man' came about. "Last April, I'd just finished 'Time Out' which was designed to be given away in prisons. The recording situation for that album was so good and I felt so relaxed - in a way I hadn't felt for years in a studio - that I thought we should carry on and do another album and that's how 'Rebel Man' came about."

The album's title track has a deliciously authentic reggae feel to it - undoubtedly influenced by former Island Records label-mate Bob Marley - and I wondered who the eponymous rebel man in the song was based on. "The rebel man in the song is me," he admits. "It's about the whole thing of thinking that you're fine but, due to man's fallen nature, we all have a tendency to rebel. We want to live life our own way with no interference from anyone else. Even when you become a follower of Jesus, you've still got to fight that old nature. I think it's easy to be religious and say that you've got it all together and we all would like to be nice and shiny, live a good life and go to church but, in reality, there's stuff going on our lives that we wouldn't dare speak to anybody else about - but God knows. Thankfully, God is a God of grace and, for me, the power of the Holy Spirit is very real and helps me to change." 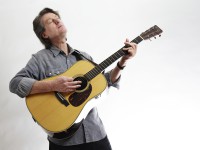 Bryn's belief that people can be changed underpins his 25 year-long commitment to playing his songs and sharing his faith in prisons - something he is typically matter of fact about. "The reality is that, every time I go into a prison, I realise that it could have been me in there," he confesses. "I've done things that were wrong in my life but the only difference is I didn't get caught."

With that in mind, I ask Bryn how he was drawn to perform and minister in situations that can often be described as less than appealing and occasionally unpredictable and volatile. "Over a period of about three years, towards the end of the '80s, I kept thinking I wanted to minister to Jesus more," he advises. "I kept coming across the Scripture in Matthew 25 - the parable about the sheep and the goats - where it says 'when I was in prison you visited me'. Every time I read that passage, my heart leapt and I kept thinking about how I'd love to go into a prison. Then I did the 'yeah but' thing and talked myself out of it by questioning what I'd actually do in prison and the fact that I didn't know anyone who was involved in that kind of ministry anyway. However, that Scripture kept coming back to me and, in 1990, I started as a staff member in the first Vineyard church in London and the pastor said my first tasks were to get the music up and running in the church and then start a prison ministry! I called up all the prison chaplains in London and asked if we could come in and they all turned me down except for one of them. We went in one Wednesday to see what was happening and, as we were coming out, the chaplain effectively told us it was our turn the next week and we've carried on from there."

With both 'Inside Out' and 'Time Out' matching the quality of his many mainstream releases, it's clear that Bryn is intent on maintaining artistic integrity no matter the target audience. "I believe God gave us his best and we should do likewise," states Bryn. "There is a proverb that says a man's gifts makes room for him before prince and kings. The people I play to in prisons are kings. I know they've done terrible things but somehow I see them the way God sees them - I see the potential that they all have and that things can change. When I'm giving them an album, I want to give them my very best so that they sense the fact that they themselves are special."

In addition to maintaining a high standard musically, Bryn is also meticulous about the choice of songs for such releases. "I tried to choose the tracks as if I was in a prison cell listening with headphones on," he advises. "The title track 'Time Out' is about the frustration of being stuck in a place that you can't get out of - something you really feel when you go into prisons. Another song on the album is a version of the old Sonny Boy Williamson number 'Help Me' and it's a great one to do in prisons because it's instantly recognisable with the Booker T 'Green Onions' riff and the words are so relevant to the guys in there - 'you've got to help me, I can't do it all by myself'. The song allows me to communicate the fact that people can't change all by themselves and that they need help to do so. I also decided to do an instrumental version of the Elvis song 'Crying In The Chapel' because, over the years, I've seen so many guys in tears in prison chapels." 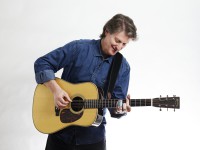 Bryn's exquisite slide playing on that particular Elvis track and on both 'Time Out' and 'Rebel Man' in general highlights his standing as one of the premier bottleneck players in the country and it's clearly a skill he has honed over the years. "I started playing slide when I first got an electric guitar because the strings were so heavy back then," Bryn recalls. "I found it hard to bend the strings but then I read an article about bottleneck guitar. So when I came down to London when I was 17, I was playing slide instead of bending strings because I didn't know you could get light gauge strings! Whilst I was in London, I got the opportunity to see the likes of Jimi Hendrix and Eric Clapton play and I also really loved Booker T guitarist Steve Cropper's playing and I put the slide down at that point. After a break, I started playing it again when I joined a band called Wolfgang in the '70s. One guy was playing straight lead guitar so I decided to play slide again. Ry Cooder had just brought out his first album and I hadn't fully realised that slide guitar could be so melodic. I'd always thought of it in the Elmore James way where you do a full six string chord and you whack it out like he does on 'Dust My Broom' but then I realised you can also do single notes which are much more effective. I really come from the whole George Harrison approach to solos where you find a counter melody that will really add something to the song."

With an expansive musical history covering nearly five decades, I ask Bryn what he would say to his 17 year old self starting out in London. "I'd say go for it - just do exactly the same," he replies without hesitation. "I had to get out of Lancashire because there was nothing going for me there. I wasn't enjoying my life at that time - I had a regular job but I really wanted to play guitar. In those days, you had to go where it was being done and, back then, it was London. I didn't know anybody down there but I got on a bus with a guitar and a suitcase and slept in a bus station. I went to as many auditions as I could and, thankfully, I got that phone call. If you're going to do music, it's a hard life - you have to go without and you've got to make sure it's something that you really want to do."

With 'Rebel Man' and 'Time Out' ranking amongst his best work to date and an obvious passion to keep moving forward, it seems that Bryn Haworth's musical journey is far from over. "I just want to keep playing," he confirms in closing. "I don't want to retire. As long as I can physically still do it, I'll keep going."