Bruce: Recording 'World Service' locally, with a simpler set up - how was that compared to some of the relevant experiences with previous albums?

MS: "Because we're on the road so much now, it only works for us to be recording locally, near our families. There are amazing studios in London, but we found this great place just up the road - a sort of barn - and we set up all our gear in there and just made it work. We're seven albums in, so we've done enough to know that if you're able to create a good emotion, and the songs are good, you can record it anywhere. We hooked up with this great guy called Julian Kindred (co-producer with the band on 'World Service') who helped us do that, and he was fantastic. It was very relaxing, as we weren't paying much for it, so we were able to take our time. Also it's 10 minutes' drive from all of our houses, so we can get in there, work until six o'clock and then go home."

Bruce: Many of the songs on 'World Service' feature long interludes and endings, which are not very radio-friendly, but which are energising to listen to, as they just prolong the high-points of the songs. Is this album designed to be played live?

SG: "It's what we enjoy doing. (Chuckles to himself). We've always had a tendency to go on a bit too long, but that's just in our nature and that's how the songs develop in the studio. I'm a real outro fan. I feel like you can really build up to it and then keep going and going. It's not really by design - that's what happened. The arrangements are pretty much nailed down before we start recording, but we're always open to new ideas while we're busy so we added in some stuff and took out some other bits. What you hear on 'World Service' is cut down - there are a few edits in there. We just like it that way."

Bruce: There's a statement on your website (www.delirious.co.uk): "The life of Delirious? has had its twists and turns of late", and elsewhere, "When life is tough but God is good". Can you elaborate?

MS: "We're all two or three years older than we were than when we recorded the last album, and I guess our outlooks and our worldviews have changed. We're running a company here as well - Furious? Records (points at the loyal minions bent over their computers outside the interview room) - which releases our records around the world, so there's a lot of business-y stuff that happens as well, which Stu and I try not to get involved in."

MS: "This year's been tough economically. The music industry's taken a blow and sales aren't as good as they used to be. That's forced us to our knees a bit - we can't just presume that God's blessing the company from year to year, and we've had to think really long and hard about what our priorities are. Unfortunately we've had to streamline what we're doing here a little bit and that's been very tough, personnel-wise (pauses, looks genuinely upset). It has been a difficult year and through all of that time we've been making this record, hanging on for dear life and hoping that God will bless what we do. Quite exciting, really."

Bruce: The lyrical content throughout 'World Service' is largely honest and introspective rather than actively Bible-linked. Occasionally, it's difficult to listen to. Are you trying to challenge listeners, where before, perhaps, you've sought to inspire them? 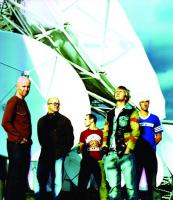 MS: "We never intended to set out and create something like that. That's just genuinely what was going on. It transferred itself to the record very naturally, even without us really thinking about it. That's the place we were in - the record's like a little peek into our lives last year, and the fragility that we felt, asking 'What are you up to, God?' Next time round we won't make a record like that, because we'll be in another place. The songs come along and that's it for the record - we can't make it happen any other way. I think deep down we're really, really proud of 'World Service' and amazed by how good it's sounding. It's got a good balance of self-explanatory 'up' stuff like 'Rain Down', 'God In Heaven' and 'Grace Like A River', and then the more introspective 'I Was Blind' and 'Mountain's High'."

Bruce: "Majesty (Here I Am)" is an instant classic. Do you know it's going to be huge as you write it, and how does it feel to create something that will go on to soundtrack people's lives?

SG: "When a song like that comes out of personal experience, you don't even know if it's going to make the album. I felt like a had a real experience of God's grace and out of that came 'Grace Like A River' and 'Majesty (Here I Am)', but you end up thinking, 'Maybe that's just my personal response to that situation. Maybe that's where it stays.' You also wonder if it's too much of a straight worship song for this album and so on, but you don't think it'll be a classic - you're just pleased when people respond to it in a positive way."

MS: "It's awesome - or 'ahsome', as the Americans say (Delirious? will be touring the States - again - through December and into the New Year) - to think that the music we're creating in our own little private space suddenly has this life of its own; that people take it for themselves and that it becomes their soundtrack. It's mind boggling. I think we've had the privilege of experiencing this all along and the new record will be the same. I remember when we played 'Majesty (Here I Am)' for the first time in our own church and there was that feeling, again, of 'God's given us something special here.' It's possibly the most humbling feeling you can experience, to get a glimpse that God might have used you to leave something for people that is going to help them in their walk with him. That's something that's changed in the last three years for us. We're a bit older and we've had time to reflect on what has happened in the last 10 years and I think we've realised that it's not a bad thing to leave songs like that in history, where people might be singing them in 100 years' time. Maybe that is more important than having a Number One in the mainstream chart that will go in and out and be a song that was played on Radio One for two weeks, but which doesn't leave its mark in history. It sounds crazy, but we're only starting to realise that God might have intended us to leave this music for people to find in their own space and time, whether it's tomorrow or in 100 years' time."