Bruce: "Inside Outside": A bit of The Edge on "Numb" (the U2 guitarist's famous coming out as a lead vocalist) to begin with, then a lovely, quiet, upbeat body before ending in a minor key. Explain.

MS: "You're referring to Stu's singing? Great, isn't it? We've done it once before, on the 'Fire' track, but this is a bit more definitive. We demoed it that way - quieter, more open - and thought it sounded great, so why change it?"

SG: "The ending just sounded nice. The song takes the theme of 'Investigate' on 'Glo', really. God is all around. He's inside and he's outside and there's no escaping him and the chorus flips that - 'You captivate me' - in that we really love that there's nowhere we can go that is outside of God's love. The ending is just another outro - Martin's playing a really nice bit."

MS: "That's my big guitar moment, isn't it? Put that in there." (Grins, pointing at my pad)

SG: "It just felt right at the time."

Bruce: "Everyone Knows" has three distinctive parts, including a trippy BjÃ¶rk-like bit. Was it fun to put together?

MS: "Ah, our West End musical. Not that it's meant to be a joke, but that's the moment of humour on the album. You've got Tim (Jupp, Delirious? keyboardist and programmer) playing trumpet on there as well. It's his first appearance in that role."

SG: "We had a lot of fun with the backing vocals on this album. When we were writing, we both (indicates himself and Martin) got into the 'By The Way' album by the Red Hot Chili Peppers. What struck me on there were the 'oohs' and 'aahs' that they do in the background. It's only a little bit, I suppose, but we went along with that. We can't do the stage bit that they do, though - I haven't got the abs for that." 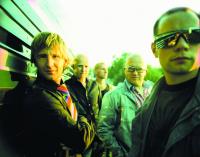 Bruce: "With You": The filtered vocal is a little bit Muse again. Are you fans? Are they fans? Is there a mutual admiration society?

MS: "We started as Radiohead fans, and Muse have come out of that camp, in a way, and done their version of that kind of music."

MS: "It's a fresh song for us, with a real drive. It's actually, I think, the closest reference to Coldplay that I've heard."

Bruce: "Mountain's High": At first, it sounds negative, like it's all too much; all too hard. What's the intended message and what was the inspiration?

MS: "The upswing of that song is the last track on the album, 'Every Little Thing'. You hit the last four songs and the record shifts into another gear; goes to another place. That surprises people, but I think they're some of the best songs on the record in some respects. With 'Mountain's High', I think we decided really early on not to make up a happy ending. Getting back to when our friend died - there's a moment when you're hearing the news about a dear friend dying when you don't actually know how tomorrow's going to be. You don't know if his wife and his four teenage daughters are going to be able to get out of bed in the morning - why would they want to carry on? There's a moment when you don't think there could be a happy ending. Even though you know that God's in control, it's just so (searches for the right word).grim. And I think that song is just like that, saying, 'This is how it felt at the time.' In the context of the record it works."