Bruce: "Every Little Thing" does seem like a happy ending, though. Was it a conscious decision to close the album with this song?

SG: "I think it was conscious when we were sequencing the album. They're all good songs, so where do you put what? Sometimes we've had the mentality of putting the best ones up the front, but we had a real struggle here and we eventually realised what a great song this was to end the album."

Bruce: "I Was Blind": This is positive, almost worshipful. Why has it been placed right alongside the relative downer that is "Mountain's High"?

MS: "I don't think we planned it that way. While you're sequencing it, you get a feel for what should come next, according to how the songs cross-fade and so on, and that one just ended up being next. The drop-down section in 'I Was Blind' is probably my favourite moment on the record. They're difficult songs, admittedly - you may not like them at first, but they do make you want to listen to them again."

Bruce: "Feel It Coming On" features the line: "For the first time in our lives, we come without a plan." Why the uncertainty?

MS: "There's been a lot of soul searching going on. It's always been the case up to now that there are enough skills and gifting within the team to ensure that we can always come up with a plan and an idea for the next year or whatever, but here we came to a place where we were feeling it could all genuinely end tomorrow. We were either going to split up and do our own things or keep going and find out what God wants to do with us. For the first time we were really unsure of what was happening. We'd walked the plank and were looking down and wondering how it was going to be to jump again."

SG: "We'd been introduced to Sam a while back and he worked with us, mixing a couple of tracks for the US release of 'Audio Lessonover?', which was called 'Touch'. We clicked with him and enjoyed his mixes, so he was one of the first choices for us this time around." 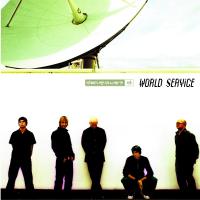 Bruce: Another Gibson - Mel, this time - and his controversial new film project The Passion Of Christ. Apparently he'd like "Majesty (Here I Am)" for the soundtrack? How do you feel about that?

SG: We were at an event in the States called Harvest Crusade and they had the trailer for the movie and they projected it behind us as we played and filmed the result. Since then, we've chatted to people at Icon, the film's production company, about how we can help them promote it."

MS: "We've seen (the film) and it's incredible. We cried most of the way through. But we're up for the soundtrack along with a thousand other bands, so we'll see."

Bruce: You recently released 'Libertad': Why a Spanish album?

MS: "That was an idea from our Mexican and South American distributor. They had this plan for a compilation of our songs with me singing in Spanish. We took some of the older, 'Cutting Edge' stuff and I spent a week with a vocal coach who flew out from Mexico and it's come out okay - it was terrifying doing it. I can't speak Spanish, but I know some worship buzzwords now. The album's also selling in Spain and hopefully we'll be playing in Mexico next summer."