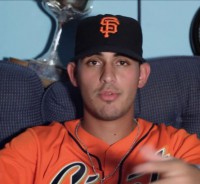 Rapper Eric Heron may only this month be releasing his debut full-length album but it's not for nothing that one website recently called the emcee from San Antonio, Texas, "one of the hardest working artists in hip-hop." Since his emergence in February 2015 with the free EP 'Enticing Lights' this most skilled and articulate of rappers has released three EPs and eight singles with his 'Dawn' EP containing two tracks - "Be Me" and "Dawn ftg Abiv & Whatuprg" which have begun to be heard on Cross Rhythms. Now with his 'Afterglow: The Somewhat Complicated Story' album, released on 22nd December, things are looking bright for the graduate wordsmith.

Talking about 'Afterglow: The Somewhat Complicated Story' Heron said, "Life is all about perspective: some instances it feels really easy, other times incredibly difficult. Life isn't always black and white, most of the time it's just somewhat complicated." The son of two parents who emigrated from Cuba, Eric, whose family name is Garza, was instilled with the values of hard work and diligence from a young age. Eric was born in Miami but spent most of his childhood and teenage years in San Antonio, Texas. His main interest in his youth was baseball.

Eric continued to be enthusiastic about baseball particularly when his brother was drafted to play ball with the Milwaukee Brewers. It wasn't until college that Garza began to enjoy music and he began to make some rap recordings.

Shortly before graduating from Georgetown University he released the EP 'Enticing Lights'. He said at the time, "I wouldn't say I make Christian music but I'd be lying to say that every song I've ever made has been with the intention of bringing glory to God or to find God or to search for stuff that I've been missing my whole life." One of Eric's biggest goals as a musician is to forge a link between music and sports. He said, "I want to represent the athlete and music culture and let people know they can chase dreams. I want to explore that heavy, submerging those two cultures."

This year Heron has made steady progress and his 'Dawn' EP has garnered over 200,000 streams and the single and video from 'Afterglow: The Somewhat Complicated Story', "Bet (ftg Lawren)" is picking up plenty of views.