Dave Causton takes a look at GOLD CITY and shows not all southern gospel is music performed by pot-bellied veterans. 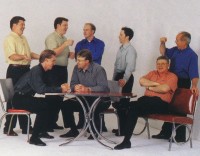 They have the look of seven clean-cut all American boys from the South - Mom's apple-pie and Macleans toothpaste ooze from every pore. If John-boy Walton had gotten further with his guitar lessons this would have been the group he'd have joined. But appearances can be deceptive and there is more to Gold City than Apple Pie and designer smiles...

The group are now at the top of their particular tree, and this has doubled their audiences and tripled their record sales in the past three years. They are a busy group travelling around the United States doing around 250 concerts a year, and as yet have not had time to see foreign lands. With a strong interest to live the life they sing about they have sponsored some children in Mexico, and when they paid a visit to see them, they were appalled by the conditions that they were living in.

They are keen to spread the message of helping needy children like these when they give their concerts, telling the audiences about the things they have seen, and what can be done to help rectify the situation.

"As far as the success that we are celebrating right now, we have to give all the glory to God," Ivan Parker says. "He is the reason why we are where we are today. We feel very strongly that if we take our eyes off God, everything could just as easily be taken away from us, as easily as we received it. We attribute it all to God, and to him being No: 1 in our lives."

Pianist Gary Jones says, "I've been with Gold City since it first started, I've seen it change drastically. Our goal and our purpose hasn't always been what it should have been. We all went through a sort of re-dedication period about four years ago that has made such a difference. Now the group is geared for a ministerial standpoint, its not just show business for us, although we do like to entertain. We believe Christians should be entertained, we like to have a lot of fun, on and off stage. But when people like ourselves are lifting up the Lord, Satan will always hit from ever angle. He'll come and try and mess things up. We took a stand, and the Lord has blessed us since that period of time.

" Since those days the group has not looked back, and they have taken a whole host of awards over the years. The most recent honours were for "Getting Ready To Leave This World" from 'Goin' Home' which received a Dove nomination for Southern Gospel album of the year.

As with so many others, success for the members of Gold City has not come overnight. Many of the group paid their dues in other southern gospel groups, before coming together in a winning combination.

The current razor sharp harmonies of the group were the product of early training in other outfits. Riley sang with The South Men and also worked with pianist Jones in the Dixie Echos.

Parker and LeFevre, who is one of the well known LeFevre gospel clan, both toured with The Singing Americans, and bass player Fain played with another well known southern singing family The Nelons. Drummer Doug Riley has his own musical history, as the son of Tim Riley, well known on the gospel scene.

With their lively performances, based on the long standing harmony group tradition, Gold City seem to have the right blend of sound to meet all ages, from the under 15 upwards. They seem set for a career in southern gospel that will span many years to come.

Southern gospel is a fascinating musical movement, one which has been around for decades but which has little or no exposure outside of the southern states of America - hence its name.

Broadly speaking southern gospel is a form of country music gospel performed by barbershop harmony, groups, it has some of the creative vitality and excitement of black gospel fused to its country roots, and with its own touring circuit, record labels (and even magazines!) is a self-contained musical culture.

This genre within a genre has only occasionally come to the notice of a mainstream audiences when groups like the Jordanaires or the Oakridge Boys have 'crossover' onto pop and country music.

Southern gospel in its purest form however can still be heard performed by hundreds of harmony teams criss-crossing the southern States. The Florida Boys, the much-loved J.D.Summer and The Stamps Quartet, The Kinsmen, and dozens more seasoned southern gospel teams are still recording after decades out on the road.

The opinions expressed in this article are not necessarily those held by Cross Rhythms. Any expressed views were accurate at the time of publishing but may or may not reflect the views of the individuals concerned at a later date.
About Dave Causton
Dave Causton is the co-owner of Crossways Music, an Essex-based Christian music specialist.