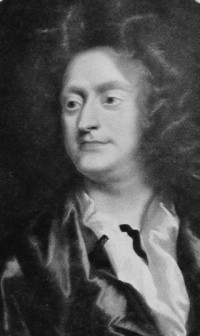 What with Samuel Pepys rocketing over the cobbled streets on his skateboard, diary in hand, Dryden and Milton (both poets), Captain Cooke (of musical not nautical fame..), John Blow and the Purcells running after recording contracts, Henry Purcell's neighbours in the Parish of St Margarets, Westminster may well have been the up-market precursors of Ramsey Street. Be that as it may, although H.P. had some pretty awe-inspiring neighbours, he was born into an England that was passing through turbulent times - The Great Plague, The Fire of London, The Restoration of the Monarchy, the schemings of the Earl of Monmouth against Charles II, the doomed reign of James II (1685-88), and the 'Glorious Revolution' - when William of Orange came bearing tulips (!) and overthrew James with a bloodless coup, to name but a few.

At the age of 6, the young Henry Purcell would have been witness to the continual sound of the death knell and the frequent carting off of the night's victims, and the general atmosphere of fear and hopelessness. Some attribute the "renowned melancholy" of Purcell's musical expression to these memories. Death was not the removed, clinical thing that it is today - in those days death was very much a part of life - if you'll pardon my logic! By the time he was 8, H.P. had taken part in Charles ll's gala ceremonies for the Order of the Garter - and he eventually became one of the court musicians (as one of his many responsibilities. Charles II was a notoriously licentious King with several mistresses in tow and at one point a Dr Creeton preached before the King against adultery, and likening his sins to that of David with Bathsheba. A contemporary lames Bakker(?) - the Archbishop of Canterbury no less was the source of one or two rumours too as Pepys reports.That the Archbishop of Canterbury "do keep a wench and that he is as very a wencher as can be..."

The upshot of all this is that music and literature of the day took on a political as well as moral and recreational role-making subtle and sometimes not so subtle comments on current issues and morals and taking a bias usually on the side of authority. In some instances it was undoubtedly propaganda. In the light of this, it's not surprising that H.P.'s music sometimes made political capital out of some of the biblical narratives that he set. Stories and Psalms of David were a particular favourite because David was so often beleaguered and turned on by those he loved. The story of David and Absalan was paralleled with Charles the second and his bastard (excuse my french) son the Duke of Monmouth who were at odds with one another. The vehicles for these diatribes were the 'Anthem' and the 'Catch 1', as settings of Psalms like Psalm 3 - in which the main characters of the story were paralleled with Shaftesbury (Achitaphel) who ended up in the tower, Charlie II (David), Monmouth (Absolan), and the Duchess of Portsmouth (Bathsheba).

IN 1682 H.P. was required to take the Anglican Communion in the presence of two witnesses possibly because of doubts about his leanings (Popewise or not that is!) - there was a lot of anti-catholic feeling around at the time inspired by Titus Oats and allegations of a Popist plot - at any rate the two witnesses had to swear in court under oath that they had seen Purcell take the sacrament.

Humour - I'm pleased to note was also important to the Baroqueite (to coin a word) - possibly because life was so unpredictable and fraught with woe. In 1677 Purcell provided the catch for the comedy 'The English Lawyer' entitled 'My wife has a tongue as good as e'er twanged' - they don't write 'em like that anymore - it's probably just as well, because it was not one of Purcells better offerings.

Part of Purcell's duties included the provision of church organs - tuning and maintenance, and contracts were often hotly contested. In one instance, two contractors - Smith and Harris, each provided an organ for the Temple Church, and several musicians (Purcell, John Blow and Draghi) were invited to perform on the two instruments so that the best organ could be found. The performers and builders were probably lucky to come out of it in one piece, because the competition was adjudicated by none other than the infamous Judge Jeffries - renowned for handing out the death sentence and later in his career for sentencing 200 to death by hanging drawing and quartering in one sitting at the 'Bloody Assizes'.

We tend to think these days that we are the originators of the advertising jingle - not so! Purcell advertised one music book with a catch entitled 'To all lovers of music' which is nothing more or less than a jingle. Another piece written to celebrate Queen Mary's birthday, extolled the brave deeds of King William and ended with the phrase 'Go on, go on, illustrious man' rather comically repeated ad infinitum - and puts me in mind of that washing machine ad!

Finally I imagine that Purcell's own feelings about music in church and in general would be very much akin to those expressed by Henry Playford in the introduction to 'Harmonia Sacra' for which Purcell contributed the lion's share...

"...'tis the meanest and most mechanical office of this noble science to play upon the ear, and strike fancy with a superficial delight; but when holy and spiritual things are it's subject, it proves of a more subtle and refined nature, whilst darting itself through the organs of sense, it warms and actuates all the powers of the soul, and fills the mind with the brightest and most ravishing contemplations..."

Neither scripture nor music are neutral - they make statements that need to be acted on or that affect the hearer in one way or another - one of the greatest strengths of Purcell's sacred music is that he saw this and made use of it. If on occasions he was wide of the mark at least the intent was to use the power of music for good and the words that he set as the 'two edged sword' that they are.

PURCELL'S LIFE
Born in London, Purcell lived until he was 36. He was the son of a Gentleman of the Chapel Royal - probably Henry Purcell and he became a boy of the chapel where his masters included Pelham Humphrey, John Blow (possibly) and Captain Cooke.

At the age of 14 when his voice broke he became apprenticed to John Hingston, and a repairer/tuner of Regals organs, virginals and wind instruments. In 1679 he was appointed Organist of Westminster Abbey on a salary of Â£10 per annum.

In 1683 he succeeded Hingston as keeper of the instruments on Â£60 per year although he was lucky if he received payment on time (or at all). He provided a small organ for the coronation of James II in Westminster Abbey and also for the coronation of William and Mary. On these occasions, spectators were allowed into the great organ loft for which Purcell took money in 1689 but the chapter gave him two days to hand it back or lose his position and salary. It was not a matter of corruption (on Purcell's part) more likely a misunderstanding of an old practice. Six years later in 1695 Purcell died and was buried free of charge at the foot of the organs in the Abbey - his premature death was a great loss to the nation.

He composed many royal Odes, and church music - some in the English style - grave and polyphonic and some in the french style admired by his patron Charles II - more open and simple. Much of his theatre music is not performable due to the extravagance of the texts. Instrumental music includes some harpsichord suites, sonatas for two violins, cello and harpsichord. His choral music is said to have influenced Handel when he settled in England.

RECOMMENDED RECORDINGS
Dido And Aeneas Montiverdi Choir Hambourg/Sir Charles Mackerras Archiv Galleria 431 121-2 (Deutsche Gramophon)
Arguably Purcells greatest work for the stage, and probably the first English Opera that is really worthy of the name. It is a tribute to William and Mary and his fellow countrymen written at a time when the former had not been particularly kind to him and highlights an impressive ability to rise above pettiness.

Te Deum And Jubilate Deo In D 4 Anthems The English Concert Trevor Pinnock Choir of Christ Church Cathedral Oxford Archiv Galleria 427 124-2
I chose this recording because the English Concert and Trevor Pinnock are particular favourites of mine when it comes to things Baroque. Here is an opportunity to listen to some subtle Rennaissance propaganda as well as some good sacred music.

Songs And Airs Emma Kirkby/Anthony Rooley/Christopher Hogwood L'Oiseau-Lyre417 123-2 (Decca)
Here's a selection of songs and airs that transport the listener back to a stately home of the 1 7th century. All that's missing is bad breath, a few rats, open sewers, uncomfortable ruffs and codpieces etc...

Odes English Concert/Trevor Pinnock Archiv Produktion 427 663-2 (Deutchse Gramophon)
The interesting thing about Baroque Odes, are the insights they give into how people of that era viewed themselves - their humour and interests - the sort of topics that were important to them - and here is a collection of the best.