Jeremy Camp: Carried Through the Storm

The new worship album by America's JEREMY CAMP wasn't born in a marketing meeting but evolved in a time of stark personal tragedy. Tony Cummings reports. 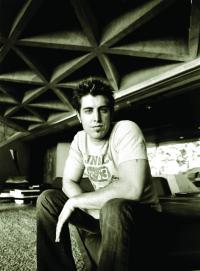 American singer, songwriter and worship leader Jeremy Camp didn't know when he was leading worship and watching his first young wife die of cancer in 2001 that the songs birthed from that experience would touch others. Camp has included some of these songs on 'Carried Me: The Worship Project'. He says, "The songs are ones that have meant so much to me in my life. Each of them has a special place in my heart because I remember singing them at different times - good times and bad times."

Jeremy burst onto the American scene when he was signed to Tooth & Nail/BEC Records. His record label boss Brandon Ebel said at the time of the release of Jeremy's 'Stay' album, "I have never been this excited about a new artist since the OC Supertones." Ebel's instincts proved reliable. 'Stay', with the catchy blend of rock and progressive pop and finely crafted songs, proved a major hit on US Christian radio. Now the 26 year old singer, from Lafayette, Indiana, who attended Bible college in Murrieta, California and cut his teeth leading worship all over Southern California, is set to expand his audience further with the breathtaking 'Carried Me' album. With the release of that album Jeremy's testimony about the loss of his young wife Melissa has come into the spotlight. He recently told CCM magazine, "I would read about how God healed in the Gospels and I would throw my Bible across the room. I questioned whether God is a loving God. In frustration I would say, 'I don't want to share in your faithfulness because I don't think you are faithful.' So many times I would pound on my bed because I wanted to punch something. The hardest part was trying to understand why she had to suffer. We would watch her cringe and cry because of the pain."

Melissa passed away on 5th February, 2001, and Camp felt broken and betrayed. He confesses, "God gave us this hope that we would have children and then everything was taken away. We literally had thousands of people around the world pray for her. We all believed she would be healed. I truly thought we had confirmation. When she died, I just didn't get it." During those difficult times, Camp talked to countless people in search of answers. One pastor asked if he'd prayed, believed and done everything he could, which, of course, he had. The pastor then remarked that Camp could take heart because if God took her despite all his pleas, he definitely had a reason. Camp reflects, "It really made sense. I found rest in knowing that God sees the beginning and the end and there really was a reason why."

Jeremy now finds himself on the other side, as people traumatised by cancer come to him looking for answers. His response? "You literally have to take it a day at a time. You say, 'God, I don't know how I'm going to get through tomorrow or even the next hour, but I need the strength.' You have to rest in the fact that God is a big God and he's in control. God didn't make this happen and it's not punishment for anything. It's simply something God has a reason to allow."

During the autumn of 2002 Jeremy undertook a major tour of the States, Festival Con Dios, along with the Newsboys and Benjamin Gate. The latter's lead singer Adrienne Liesching had sprained her ankle early in the tour and was limping around on crutches. Camp introduced himself to offer encouragement. "We talked about what God was doing and I saw her grow spiritually on the tour. Pretty soon, I was looking around for her and wanting to see her all the time. I eventually started liking her, which was something I really couldn't deal with at that point. I had all these guilty feelings because of Melissa."

For a time, Camp tried to distance himself but soon realised he had to move forward with his personal life. He continues, "After the tour, we started talking a lot and getting to know each other really well. I started feeling that God brought her into my life. Early last year, we 'knew', and we got engaged in April." But it wasn't all roses, as the couple faced some unique challenges in their relationship. For one, Melissa's story makes up the major part of Camp's testimony and, despite all the circumstances, even the most spiritually strong female might feel insecure hearing her boyfriend praise his last wife each night. "When we first started (dating), it was difficult for her to hear how amazing Melissa was," admits Camp. "Adrienne said, 'Melissa was so amazing, and I don't feel that I'm that amazing woman of God.' I just assured her that she is. I love Adrienne, and her heart has been an encouragement to me. Really, it's not even an issue. She loves what God is doing through my past experiences."

wow!as i was reading this..it makes me cry and really an encouragement to me

Thank You Jeremy for your songs of your journey through pain and finding your strength and healing in Christ Jesus. Thank you for the encouragement that through your hardships God uses it to help others. I've never lost a spouse, but have lost quite a few in my family some to Cancer and others to tragic accidents and I recognize the journey, the truths applied and the road to living again. Life does keep going and her life and death was not in vain. God Bless you and the new beautiful woman in your life. I'm sure Melissa is pleased and so happy you are happy and living again. Keep the music coming it is a huge blessing to your brothers and sisters in Christ. :)

Jeremy Camp is such a wonderful inspiration. I have at least four families within my small christian school that have family members struggling with cancer and we all pray, and hearing his testimony encourages me to keep praying strong for the families and know that God has it all under control no matter the outcome.

How do I begin Jeremy? I had been out of church so long.My son & his wife had lost one baby. Pregnant with another,they started going to Church On The Rock. My husband & I began to go soon after.This pregnancy began to go wrong. Everything we could do to save this baby was what mattered. I began to listen to K-Love & it was like everytime I turned the radio on,"There Will Be A Day" would be playing...That became my song...My daughter-in-law was admitted to UK Medical Center for complete bed rest to await the birth of this baby.During this timeI heard you & your wifes baby's heartbeat had stopped...i feel on my knee's & prayed for you . We had been through that.I hope God gave you peace, i know it hurts so bad.At27 wks. UK delivered our precious aliyah weighing 1lb.2 oz. God gave us 53 days with her, as much as we wanted to keep her, we knew we had to let her go. She was so sick.So today we said Goodbye to her with a beautiful service in remembrance of her 53 days with us. At the end, we played your song,"There Will Be A Day"I hope someday you will read this & think about coming to our church to honor our precious baby who went to soon

sweet Jesus ! i thank you 4 our beloved brother jeremy .thank you lord jesus for his gr8 testimony.jeremy ty 4 your songs for us which did melt our hearts .we love you so much! may God bless you!

I am new to all of this, but need to say that Jeremy Camp has been a tremendous inspiration for me. I love your music and you are my favorite Christian artist. Your passion is evident.We can never know all the ways of the Lord.Thank You for your heartfelt music. It has touched my heart and soul and continues to. God Bless You and May You be a Blessing to Others. Liz B

My mother died Feb. 3 2004 and now 4 years later I realize that God took her to make me stronger. I lived under her for so long. I love my mom to death but I realize that God has plans for us all and he knows what he is doing with us. So keep strong with Christ. They are so many times in the Bible shown where God takes things from people, but with faith their rewards came in an abundant supply.
God Bless.

I have Jeremy's "Carried Me' CD and it has taken me to another step with worshipping my Lord!

Jeremy is such an inspiration and a great person. His precious Melissa didn't deserve to die. No I didn't know her but from what I have heard she is an inspiration too. Just remember she is in a better place now with our awesome god!