KEITH THOMPSON talks to Tony Cummings about sex, the blues and dismissing demons through music. 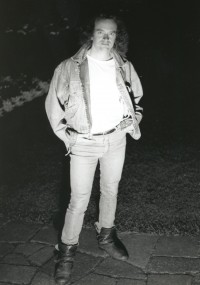 Keith Thompson's new album has a cutesy matchstick man on the inlay. But it's a long way from "The Caterpillar Song" and all-things Ishmael. Thompson's 'Young Hearts' is a hard set of self-composed tunes definitely not designed for kiddywinks. The Cheltenham-based rock gospeller gave his view on his new album. "I think Young Hearts' is a collection of songs with a prophetic edge to them. Some of the songs face up to difficult issues like sex before marriage and bereavement. I suppose a couple of the songs might be a bit controversial but Jesus was controversial too!"

The song about the S-word came about when Thompson was asked to tour as part of the 'Seduction Tour' a touring multi-media event targeted at youth. "That tour showed me the huge need there is for biblical, realistic teaching addressed to young people. I wrote The Seduction' to really tackle that issue."

Several songs on 'Young Hearts' fall into what you might call the Christian blues revival, with some mean and dirty acoustic and harmonica work (both played by multi-instrumentalist Keith). How did a working class lad from Cheltenham find that he'd got the blues?

"As far as my original influences go, I liked listening to bands like Free, Deep Purple and Led Zeppelin, But it was really any guitar music that I enjoyed. Later I got into the roots of the blues, People like John Lee Hooker and the like. I relate to the blues because it's not superficial - they come from the heart."

Always musical, Keith played in numerous bands and knocked around a bit on the Gloucester music scene.

"I became a Christian, in 1979 after living a very different lifestyle", explained Keith. "I played in several bands both professionally and semi-professionally. It was a friend of mine who led me to Christ. Not that that has made me religious, the important thing is my relationship with God. My faith immediately came through in my music. I've always written songs about my life and experiences and the things I see around me - and that hasn't really changed."

In the early days, Keith played in a Christian band called Third Day and in 1981 began an association with the ffg studios in Cheltenham, an association still in place today. In 1987 Keith was voted 'Songwriter Of The Year' by judges of The Six Counties Festival for a song on his FFG album From The Battle Place'. Around this time, after a gruelling period of seeking God, Keith took the modern day vow of poverty, otherwise known as becoming a British based professional gospel musician. He gave up his job as a printer and wrote off to some schools to get some schools work. Comments Keith: "I've never regretted taking the plunge. I've done all kinds of gigs. I've played in schools, pubs, festivals and prisons. I still play with a band from time to time but often I play solo. There have been some hard, testing times but many good times too. This year I've done tours of Denmark and Holland and recently did the 'Young Hearts' tour which went wonderfully well."

Keith's previous album 'Against The Odds' was released on Anfield Music's Marshall Pickering label in 1989. "It was very much an out- and-out rock album", commented Keith, "very different from 'Young Hearts'. It came about when Dave Anfield turned up at one of my gigs and offered to make an album with me. We still work together - I played guitar on a Marshall Pickering album by Linda Pearce called 'Tears of Love' and I've recently been recording an instrumental album."

Another album on which Keith has make a significant contribution is the newly released 'The World's Way Of Caring' by Devonshire keyboards man Tim Finch. Keith contributes all the lead vocals on that album. Keith had met Tim in Exeter in the March For Jesus. Remembered Tim, "I approached Keith afterwards and asked if he would be interested to do some singing on my LP. He was a bit startled but we continued the conversation on the telephone later in the week. After some prayer he phoned back and said, 'God is in this, I'll do it free.' Amen - I didn't have any money to pay him."
With the 'Young Hearts' tour, Keith will be back doing what he does best, ministering in song in gigs as diverse as London's Mean Fiddler, the Rabinswood Pentecostal Church and Exeter Prison. Did Keith ever get tired of the sheer, unrelenting slog of grassroots Christian work? "Sure sometimes" chuckled Keith. "But I think it's important to major on the positives in British music ministry. There is much to bless and encourage as well".

Keith has come to terms with the British Church's lukewarm support of the musician. "I'm not envious of what's happening in America. We shouldn't be trying to copy others. God is doing something different here. There is a story in the Bible in the book of Samuel, where Saul was troubled by an evil spirit and David used to be called upon to play his music. When he did so the evil spirit would leave Saul. I believe music is incredibly powerful and God can use it in all kinds of ways many Christians have hardly dreamed of. Now that's what I call a positive."
So do I.

Hello Keith
I first heard you in the early 90s near Middlesbourough when you accompanied the Slagels at a church planting event. I was a very new born again Christian at the time and your Young Hearts tape was my first Christian music. It got misplaced until I moved house and playing it again took me back. I have been actively involved in Churches ever since. Music is very important. Our Church, West Auckland Vinyard Church owns a cafe in West Auckland and on the third Thursday every month I run Cafe` Unplugged. This combines secular and Christian musicians great coffee and great fellowship, and through music we reach out to other musicians, and their followers, from the various clubs in the North East. If ever you are in the area do look us up. Take care, God bless. Mike

went to Glos college of A&D With Keith, came across him again on utube, would love to see him again as i'm a born again six stringer, we were both into wishbone Ash, probably nigh on 40yr ago